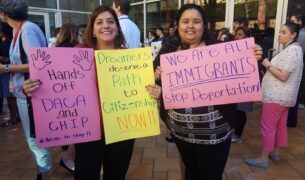 About 30 NUHW members participated in a Feb. 6 rally outside their Oakland hospital supporting undocumented immigrants brought to the United States as children. With Congress again facing pressure to restore protections for young immigrants known as Dreamers, staffers and doctors at UCSF Benioff Children’s Hospital Oakland called for a bill that protects them from […] 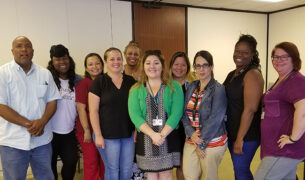 Business office and clerical workers at UCSF Benioff Children’s Hospital Oakland voted 98 percent October 12 in favor of a contract that guarantees raises of at least 13 percent through 2020. The agreement provides a retroactive 3 percent bonus, 3 percent raise this year, and 3 percent raises in 2018 and 2019, and a 1 […] 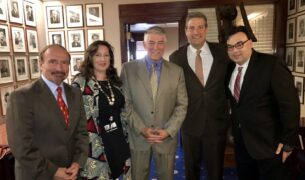 Jackie Schalit and Ken Rogers became the first NUHW members to address reporters at the National Press Club in Washington, D.C. They were joined Monday by Rep. Tim Ryan, D-Ohio, a leading voice in Congress on addressing the nation’s opioid addiction crisis, and Culyer Costanzo, who works at an addiction treatment center in Ohio.   […]