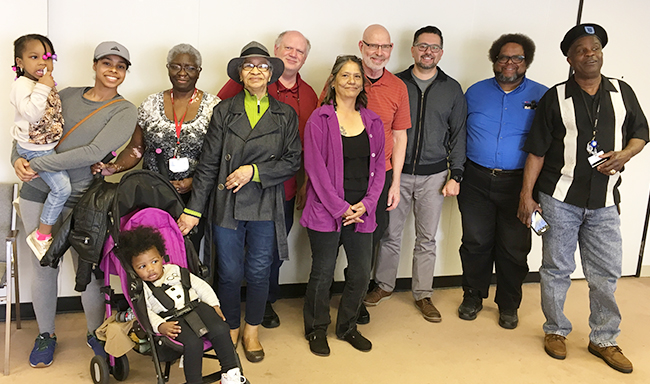 Read more below for the latest developments in the union, including grievance victories, settlements, and bargaining updates.

Sterile processing techs at Napa’s Queen of the Valley organized their co-workers in other departments to join them in a march on the boss to address chronic understaffing and poor communications at the hospital. In their meeting with the hospital’s CEO, our members outlined their issues and asked management to take specific, concrete steps to resolve them. Management committed to deal with these staffing issues by hiring and strategically using more per diems, and to respond soon with a more thorough plan.

After a year of contentious bargaining, NUHW reached an agreement with St. Joseph Health to add 49 outpatient imaging workers to our 700-member bargaining unit at Santa Rosa Memorial Hospital. Workers voted unanimously to ratify their contract on March 30. The agreement includes placing workers on the existing union wage scale, which provides wage increases for both cost of living and experience. It also includes protections for workers who don’t complete the work of co-workers who call off or are floated to the hospital from their clinic. Finally, it includes a process that recognizes seniority to staff the outpatient facility during expanded weekend, evening, and holiday hours.

Patient care committee meetings are up and running at Kindred Hospital Brea and Kindred Hospital Westminster in Orange County. Committee members at both hospitals have been meeting regularly to address staffing issues and develop solutions. Both committees fought to re-implement interdepartmental huddles to address workload and other workplace issues.

ER admitting workers at Providence Tarzana Medical Center began implementing a new trial of 12-hour shifts. They organized, drafted a proposal, and successfully convinced management to agree to a schedule of 12-hour shifts instead of the usual 8-hour shifts for a two-month trial period beginning in February. Fewer work days would allow workers to spend more time with their families, attend their children’s school activities, and pursue educational courses.