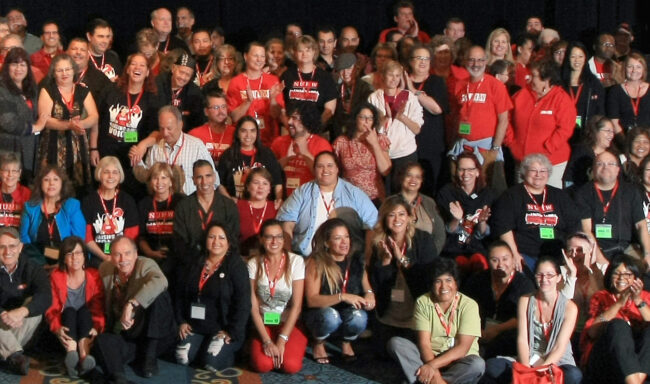 Versions of this op-ed appeared in Labor Notes and the San Francisco Examiner.

I had no money and spoke no English when I illegally crossed the border into California 23 years ago, but I worked hard and fought for the right to stay here.

Had I made that harrowing journey this year, I’m sure I’d be deported right back into the crosshairs of the Honduran government’s death squads that targeted me and many other community organizers.

Instead, I quickly won a grant of political asylum — and later received full American citizenship.

I know I’m one of the lucky ones. At the San Francisco hospital, where I work, nine out of 10 members of my union are foreign-born.

We never ask anyone about their immigration status, but I know several green card-holders who are getting ready to apply for citizenship now that their place in America seems less secure.

People might think the Bay Area is a big protective cocoon for immigrants, but that’s not the case. The Contra Costa suburb where I live is not a sanctuary city. And our elected county sheriff contracts with the Department of Homeland Security to house people awaiting deportation hearings.

Who can my co-workers count on if ICE agents come looking for them or their family members?
Our union, thankfully.

As President Donald Trump was preparing to bar Syrian refugees and bolster his deportation force, the National Union of Healthcare Workers was convening members across California to discuss how best to protect each other.

These weren’t always easy conversations, but we emerged with a consensus that we would declare ourselves a “sanctuary union” and that protecting our members from Trump’s deportation dragnet would be as high a priority as defending them from management retaliation.

To fulfill that mission, our union is partnering with a Bay Area immigration rights law firm to represent members and their relatives at risk of deportation. We’re also educating members on their rights and refusing to voluntarily provide information that federal agents could use to determine their immigration status.

Standing up to the state is not something I take lightly. In Honduras, I worked as a community organizer for human rights organizations that helped people resist land seizures and other unlawful acts. I saw lawyers, organizers and union leaders killed by drug dealers, police officers and government-backed thugs. When a soldier at a government checkpoint in 1994 made it clear that my life also was in danger, I fled to the U.S., leaving behind my wife and young daughter. We were re-united later that year after I was granted asylum.

I don’t think that America under Trump will devolve into the Honduras I left behind. But it’s a much scarier place for many of us.

By declaring itself a sanctuary, our union isn’t just making us feel safer, it’s giving members a safe space to discuss what’s happening in our country and help make a difference.

During the union meeting I attended in San Francisco earlier this year, two members questioned becoming a sanctuary union, fearful that we would be “protecting criminals.”

It fell upon me and another member to explain that our goal wasn’t to hide our undocumented brothers and sisters, but to guarantee them due process. The right to representation is one principle all union members can rally around.

We have another goal in being a sanctuary union: to make our workplaces sanctuaries as well. We are encouraging the hospitals, clinics and nursing homes where we work to adopt policies that protect patients and caregivers alike. An article in the health care journal STAT last month reported that one Bay Area clinic serving mostly immigrant patients had seen cancellations double as patients feared putting themselves at risk for deportation.

Many of our members will never march against Trump or protest a law passed by a Congress situated 3,000 miles away. But they have never been shy about standing up for their co-workers and their patients. If management won’t shield them from a xenophobic president, they should expect a fight from this sanctuary union.

Porfirio Quintano is a service employee at Sutter Health’s California Pacific Medical Center and an elected rank-and-file member of the National Union of Healthcare Workers’ Executive Board.