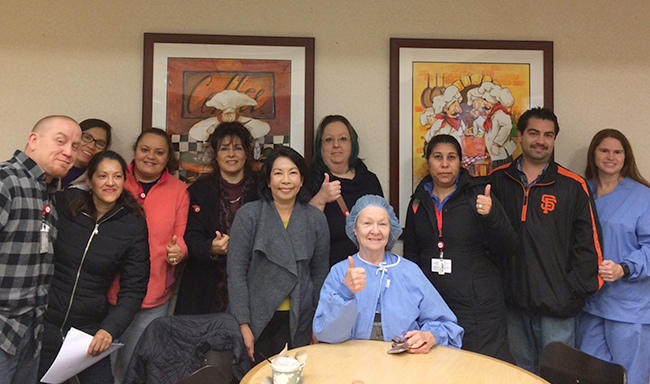 Read more below for the latest developments in the union, including grievance victories, settlements, and bargaining updates.

Members at Sutter–California Pacific Medical Center won a path to staffing relief moments before they were scheduled to testify at a hearing about Sutter’s refusal to honor our contract. After dragging its feet on the staffing issue for two years, Sutter finally conceded that an arbitrator can decide whether our nursing units are understaffed.

Members at St. Joseph’s Santa Rosa Memorial Hospital won a class-action grievance to reverse management’s unjust discipline of employees for not completing their online continuing education courses. After we provided evidence that St. Joseph knew that the online program was down and failed to reboot it in a timely manner, management rescinded all related discipline.

Emergency department techs from St. Joseph’s Queen of the Valley in Napa successfully fought unfair scheduling changes. They sent a letter to the manager and demanded that he not make any scheduling changes until they’ve had the chance to bargain with him. Upon receiving the letter, the manager informed all ED techs that their current schedules would remain in place.

Meanwhile, dietary workers at Queen of the Valley forced management to respond to their concerns about the kitchen renovation and secured a strong agreement that protects their jobs and provides a fair process for arranging schedules and assignments during and after the renovation. Despite management keeping workers in the dark about their renovation plans, NUHW members demanded to bargain over the impact and prevailed.

After a months-long evaluation process, the public Petaluma Health Care District selected El Segundo-based Paladin Healthcare to operate Petaluma Valley Hospital. The decision will have to be approved by district voters in a special election in June. NUHW members have urged the hospital’s elected board to be transparent in searching for a new hospital operator and will continue to monitor this process.

A steward from Los Alamitos Medical Center in Orange County saved a member’s job when she noticed that management was incorrectly counting tardy days that had already been overturned by a grievance victory. The steward succeeded in getting management to rescind the member’s termination notice.

An EVS worker at Los Alamitos Medical Center won the right to start work at 6:30 a.m. instead of 7 a.m. to help take care of her grandchildren in the afternoon.

After members at Kindred Hospital Brea in Orange County repeatedly raised concerns about low staffing and its impact on patient care, management finally agreed to staffing solutions proposed by members, including creating a turn-and-lift team, developing a response system to call lights, and allocating time before each shift for an informal huddle to discuss workload.

Kindred Hospital Brea members won a grievance to stop the unlawful discipline of a member for using her accrued sick time. By citing California’s paid sick leave law, we reduced her written warning to verbal counseling. We also forced the employer to start including workers’ PTO balances on their paycheck stubs and post state-mandated posters informing employees of their rights under the law.