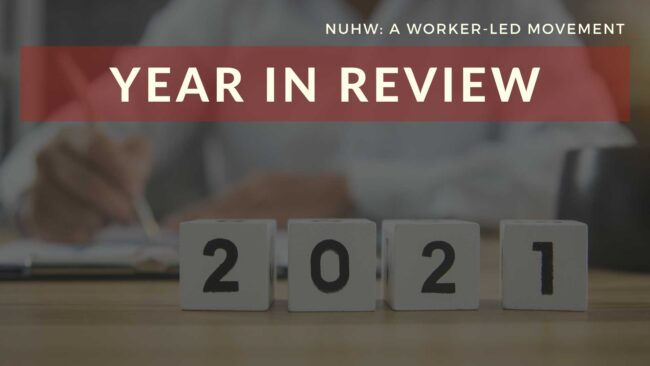 2021: A year of legislative and labor victories

NUHW members – who’ve been on the frontlines of the worst global health crisis in modern history – achieved major workplace and legislative victories in 2021. Over the past 12 months, we’ve passed a statewide mental health parity bill, forced hospitals to improve working conditions and patient care, and also helped defeat a recall effort against Governor Newsom.

After a year of unimaginable pain and loss, NUHW members confronted even harder challenges in 2021 as the year began with California’s most deadly COVID-19 surge. Caregivers valiantly responded to skyrocketing patient demand, often working through breaks and doing double shifts to help patients and support the community.

While hospital owners offered platitudes, hanging banners that read “Heroes Work Here,” NUHW members demanded that hospitals take measures to keep them and their patients safe and to honor their commitment with fair contracts that guaranteed safe staffing. Through strong bargaining, vigilant documentation of safety violations, pickets and strikes, NUHW members won battles that will improve the lives of workers and patients in 2022.

Though some of these contract victories protect our members for four years, others are only secured for one year, forcing members to renew their fight for longer-term agreements in 2022.

This year, we took the lead in sponsoring a landmark bill that will require all insurers to provide follow-up mental health care therapy appointments within 10 business days. At Kaiser Permanente, where we represent 4,000 mental health clinicians, patients must often endure waits of up to three months between appointments. Our bill, SB 221, passed the State Assembly by a vote of 76-0, and the State Senate by a final vote of 35-1, before being signed into law by Governor Gavin Newsom.

Now, Kaiser clinicians are fighting for contracts that will ensure that Kaiser follows the law, starting with hiring more staff to provide better access for patients.

When Kaiser violated our contract, costing workers more than  $500,000 in lost holiday pay,  NUHW stewards quickly filed a grievance and forced Kaiser to provide back pay to the nearly 1,200 members that were impacted.

Stewards also forced Wellpath to reimburse workers at Santa Rita Jail in Alameda County a combined $44,900 after the subcontractor charged workers for a disability benefit for which California residents are not eligible.

A win at the ballot box

We were the first union to publicly oppose the recall, and NUHW members made thousands of  phone calls to voters urging them to keep Governor Newsom in office.

We’ve shown how a strong union can protect workers and patients during a public health crisis, and workers are taking notice. Nearly 200 workers recently joined NUHW in October following organizing drives at Sutter Psych Center  in Sacramento and Seton Medical Center in Daly City, and we have several more organizing elections scheduled for January.

There will be many new challenges ahead in 2022, but NUHW members have shown that they are committed to winning the best contracts and standing up for each other and their patients.