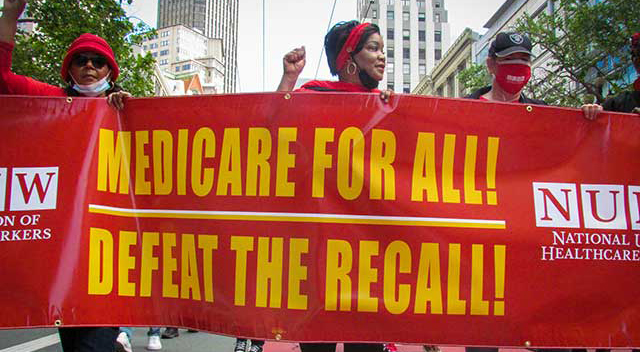 NUHW was the first union to come out against the recall and start raising money to defeat it by making the case to workers and progressive voters that Newsom had earned their support and that far more could be accomplished with him in office than any of the right-wing candidates seeking to replace him.

Early in the anti-recall campaign, NUHW members starred in videos vouching for the governor’s response to COVID-19 — policies that have led to California having the nation’s lowest rate of infection.

As the campaign heated up, NUHW members and staff volunteered nights and weekends calling voters and knocking on doors urging them to send back their ballots to defeat the recall.

“We helped deliver a decisive victory for Governor Newsom, but our work is not done,” NUHW President Sal Rosselli said. “Our focus has already shifted to helping him to deliver on his promise of advancing parity for mental health and creating a single-payer healthcare system in the state that becomes a model for the rest of the country.”

That work includes working with allies in urging Newsom to sign SB 221, NUHW’s timely access to mental health bill, and working through the governor’s Healthy California for All Commission to build a single-payer, Medicare for All healthcare system that will provide all Californians with equal access to health care, including mental health care.