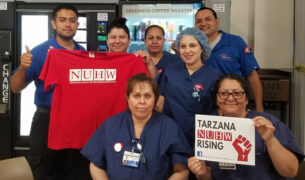 More than 50 EVS workers at Providence Tarzana Cedar Sinai Medical Center voted last week to ratify a two-year contract that includes salary increases for all employees this year, with another increase in October 2021. These workers voted last June to become NUHW members, joining more than 500 other NUHW-represented workers at the San Fernando […] 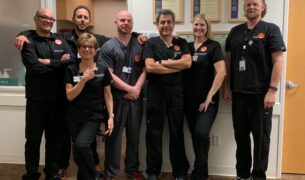 More than 2,500 NUHW members at six Providence St. Joseph Health hospitals across California sent a clear message to their employer that they are committed to fighting for their patients and each other. Wearing buttons that read, “We beat as one! We care for all!” the caregivers stood united recently in support of compatriots at […] 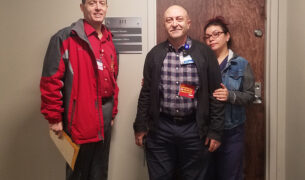 Less than a year after settling a new contract, Providence Tarzana workers are pressuring management to stop violating a provision that prohibits subcontracting out work to outside contractors. First, they filed a formal grievance demanding that management stop subcontracting out Biomed Department work to the firm enBio. Then, a delegation of workers met with the […] 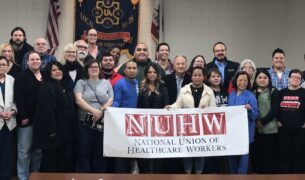 We stand with teachers! As healthcare workers, we know that caring for our patients sometimes means protecting them by fighting back against corporate greed. Now teachers in Los Angeles are fighting for smaller class sizes and to protect public education. As NUHW members, we support their fight! Many of us were inspired by the example […]