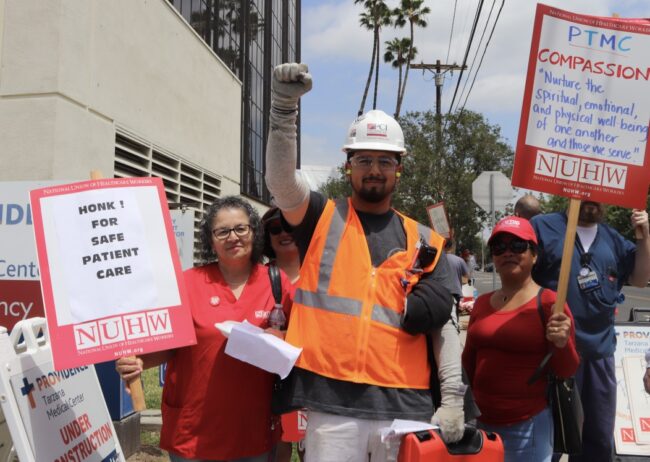 Over the past month, NUHW members have ratified new contracts that will significantly improve wages at several healthcare facilities including Providence Tarzana Medical Center, Kindred Brea and The Sequoias Portola Valley.

At Providence Tarzana, we won a four-year contract with raises ranging from 9.3 percent to 16.99 percent.

The contract also includes our first wage scale for Tarzana employees and ratification bonuses of $700 for full-time workers, $350 for part time workers and $150 for per diems. Additionally, NUHW members who were locked out of their jobs following a recent strike received a supplementary bonus.

“This contract is a testament to our unity and determination to win a fair contract against an employer that has turned on its workers,” said Jackie Morales, a unit secretary in the Emergency Department. “I’m proud to have stood on the picket line of our first ever strike, and I’m excited to build an even stronger and more determined union in the coming years.”

A worker with nine years of experience would get a 3.5 percent raise in the first year and then 4 percent for the final two years of the contract.

“We fought hard for a good contract, and we got one,” Lilliane Ives, a licensed vocational nurse at Kindred Brea. “Our unity through a picket and strike authorization was key to getting a fair deal from Kindred. Now we are ready to support our fellow Kindred members in the Bay Area get a fair deal too.”

We reached a tentative agreement this week on roughly identical terms for our members at Kindred Westminster. That contract will come up for ratification next month.

At The Sequoias Portola Valley, we won 36 to 37 percent raises along with anniversary bonuses of $150 to $300 for workers with 15 or more years of experience.

The contract also ends a prohibition on workers taking vacation during the week between Christmas and New Year’s Day and improves the policy on cashing out sick days.

“I feel happy that finally we won a contract that is very good,” said Laura Alonso, who served on the Bargaining Committee. “I feel like now we are very positive and strong, and we know that if we stay united and vigilant we can get an even better contract the next time around.”