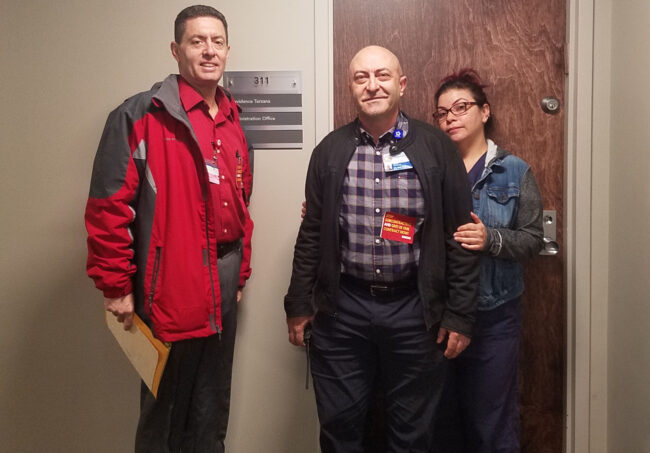 Less than a year after settling a new contract, Providence Tarzana workers are pressuring management to stop violating a provision that prohibits subcontracting out work to outside contractors.

First, they filed a formal grievance demanding that management stop subcontracting out Biomed Department work to the firm enBio.

Then, a delegation of workers met with the Tarzana COO Nick Lymberopoulos and made clear that management must honor the contract.

During the meeting, our members stressed that the only contractually-acceptable solution to understaffing in Biomed was to hire more workers – not bring in subcontractors from an outside firm.

Our delegation also told the COO that the enBio subcontractors were a risk to patient care. One enBio tech had to be escorted out of the hospital after performing maintenance on equipment that was hooked up to a child.

“We sent a strong message to management that they won’t get away with violating our contract,” said Michelle Bitolas, a steward who was part of the three-member delegation. “Even if we have to take them to arbitration, we will keep fighting to improve staffing in Biomed and defend our contract.”