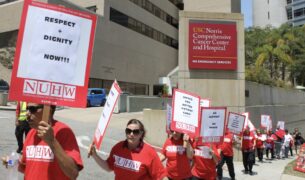 Dozens of workers, represented by the National Union of Healthcare Workers, demonstrated outside Fountain Valley Regional Hospital and the University of Southern California’s Norris Comprehensive Cancer Center this week to protest poverty wages paid by Sodexo, the hospitals’ subcontractor. Both Fountain Valley and USC Norris subcontract key divisions to Sodexo, a Fortune Global 500 firm that […]

Good pay is the best way to honor nursing assistants

This story was originally published by The Huffington Post. As part of our commemoration of Nursing Assistants Week, we profiled two of our nursing assistants and shared their stories with other members of our union. Both caregivers talked about making a difference in their patients’ lives. But neither wanted to stay in their jobs much […]