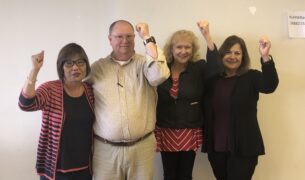 Caregivers at Santa Rita Jail negotiated a four-year contract through April 30, 2023 with across-the-board 3.75 percent annual raises each year. The contract for about 150 nurses, medical assistants, occupational therapists, and other caregivers also provides for a new step on the wage scale for workers on their 30th anniversary, more paid-time-off for workers after […] 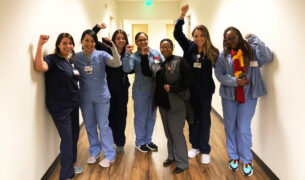 In four separate elections, more than 120 healthcare workers voted to join NUHW. The elections expand our growing presence at Keck Medicine of the University of Southern California and Marin General Hospital, where our members have already won strong contracts for our members. At USC, our newest members include technicians at a sleep disorder center, […] 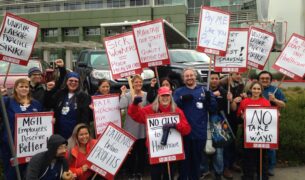 For years, Marin General Hospital has offered good health benefits to attract top quality caregivers and compensate them for not offering top-of-the-line salaries. But as contract negotiations appeared to be winding down on a new contract for NUHW-represented imaging technologists last year, management suddenly issued a new demand: the caregivers would either have to pay […]