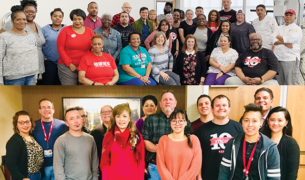 Over the past month, NUHW members at three hospitals settled one-year contracts, gaining wage increases and more time to focus on health and safety concerns during an unprecedented healthcare crisis. The contracts at Fountain Valley Regional Hospital and Medical Center, Salinas Valley Memorial Hospital and UCSF Benioff Children’s Hospital Oakland include no takeaways and provide […]