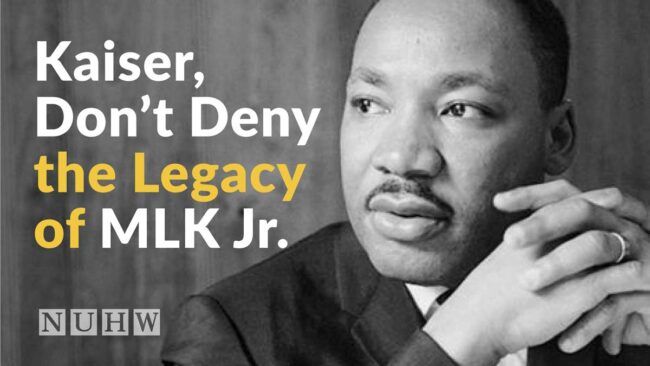 “Kaiser treats mental health care as separate and unequal to its medical care,” said Sabrina Chaumette, a social worker, who is one of only five Black mental health clinicians providing care to adult Kaiser patients in Oakland. “I appreciate that my clinic asks patients if they want to work with therapists who can provide culturally responsive care, but at Kaiser we just don’t have the numbers to do it. Because we’re so understaffed, my next available intake appointment is in four months.”

In the wake of the 2020 George Floyd murder, Black mental health clinicians at Kaiser’s Oakland and Richmond clinics approached Kaiser management to address structural racism within the HMO, which has resulted in many clinicians of color leaving Kaiser, further depriving patients of culturally competent care.

“Our management team communicated to our department that MLK was going to be a paid holiday for 2022… However, we failed to confirm if it was actually finalized. Only recently we learned that it is not.

After the clinicians voted nearly unanimously last week to strike, Kaiser CEO Greg Adams announced that Kaiser will honor Dr. King’s birthday as a paid holiday for all Kaiser employees, but not until 2023. While the clinicians see this move as a victory, they are proceeding with the strike.

“Kaiser pays a lot of lip service to racial justice, but when it comes to taking action, it’s always ‘wait till next year,’” Chaummette said. “If Kaiser can’t even keep its promise about honoring Martin Luther King, Jr. Day this year, how can we trust that it will ever take action to address structural racism in its ranks.”

“Kaiser tries to present itself as an enlightened organization, but that’s not the experience for Black and Brown therapists or patients,” said Jessica Dominguez, the founder and lead clinician at Kaiser Permanente’s La Clínica, a program in Richmond that serves Spanish speaking residents. “We see an organization that won’t even take the smallest step to confront structural racism and shows no urgency to stop the continued departures of clinicians of color who can provide all of Kaiser’s patients with culturally competent care.”

The National Union of Healthcare Workers is a member-led movement representing 15,000 healthcare workers, including more than 4,000 Kaiser mental health clinicians in California and Hawaii.