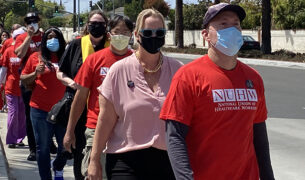 On May 6, Tenet Healthcare, one of the nation’s largest for-profit hospital chains, hosted its annual shareholders meeting touting its soaring stock price and healthy operating profit during the pandemic Several hours later, more than 150 NUHW members from three Tenet hospitals, along with nearly two-dozen community allies, gathered outside Tenet’s largest medical center in […] 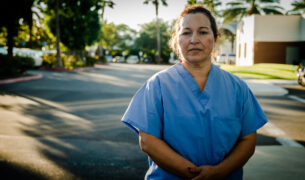 NUHW members at Tenet Healthcare hospitals in Southern California received strong support from local clergy for the launch of their “Don’t Call Me a Hero” campaign. The campaign is focused on making Tenet, a Fortune 500 company, honor the sacrifices and dedication of its workers over the past year with contracts that provide livable wages, […] 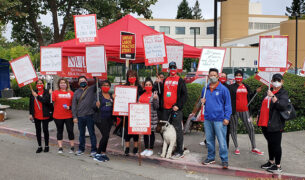 NUHW members who fought to win fair contracts and protect their health during the pandemic were awarded the prestigious Workers Rising Award from North Bay Jobs with Justice. Here is what the organization wrote about NUHW members: “When their employer insisted on cutting health and sick leave benefits during a pandemic, nearly 750 NUHW members […] 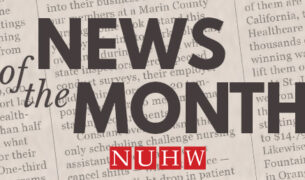 Note: Some of these stories may require a subscription.  No one has endured the past year unscathed, but America’s health-care workers have witnessed the worst of it while trying to keep the rest of us healthy and safe. They’ve fought for PPE, and with patients and visitors who refuse to wear masks. They’ve watched their […]