NUHW members expanded our picket lines to 10 locations Wednesday as our strike entered its third day.

Despite rain in Northern California, we continued to have strong participation, augmented by community allies and Kaiser patients.

And, in Roseville, Olga Trevizo filmed Facebook live videos from our picket line, while talking about her struggles to access care from Kaiser.

Our pickets today were covered by KTVU, the San Leandro Times, and the Santa Rosa Press Democrat in the Bay Area; KABC in Los Angeles; and KSWB-5 in San Diego.

On Thursday, our flagship event in Northern California will be in Sacramento. We’ll rally outside the State Capitol Building (10th and L Streets) at 10:30 a.m. and then march to the Department of Managed Health Care headquarters for a rally at 11:30 a.m.

In San Diego, we will gather outside the San Diego City Administration Building, 202 C. Street. The event will run from 9 a.m. to 2 p.m. with a noon rally.

Here is a round-up of today’s pickets

San Leandro: Nearly 100 people attended the picket and occupied a courtyard near the Emergency Department. Hospital security called policy to try to get us to move, but nothing came of it. Our guests included Stationary Engineers from Local 39 and members of the Democratic Socialists of America.

Walnut Creek: More than 110 people attended, including one patient who led chants on the bullhorn. Joshua Anijar, executive director of the Contra Costa AFL-CIO Labor Council, joined the picket line and spoke at the rally.

San Diego: In addition to the family of Chloe Roston, San Diego County Supervisor Nathan Fletcher and San Diego Councilmembers Georgette Gomez and Chris Ward spoke to members on the picket line. We also had representatives from UPTE, AFT, and the Teamsters, as well as Interfaith Worker Justice of San Diego County. Kaiser executives got upset when strikers put emoji cutouts on caution tape/safety cones outside the facility.

Redwood City: Speakers included San Mateo County Supervisor David Canepa and former Assemblymember Sally Lieber. Members marched through the psychiatry building parking lot twice, prompting security guards to put up barriers that only made it more difficult for patients to enter the building. Members held a moment of silence to honor patients who have died by suicide and chanted “One suicide is one too many.”

Roseville: We had lots of allies show up in Roseville, including two former Kaiser patients, five NUHW retirees, and eight operating engineers. One current patient brought donuts for everybody on the picket line.

Riverside: There was great energy as the picket line wound its way across the medical center and around the neighborhood from the main hospital to the psych building several times. Members led chanting, chalked sidewalks, e-mailed the president of the Southern California Permanente Medical Group, and leafletted patients.

Livermore: We passed out copies of recent Los Angeles times article and booklets with accounts from patients denied timely care.

Fresno: Members from Bakersfield participated in this picket along with teachers and community allies.

West Los Angeles: Speakers at the rally included a patient and Aura Vasquez, who’s running for City Council. Members marched to a nearby farmer’s market to leaflet and let people know what we’re fighting for.

Santa Rosa: Members marched and chanted in their NUHW ponchos through lots of rain on Monday. In addition to Shirley Zane, County Supervisors Susan Gorin and Lynda Hopkins spoke out our rally, as did Santa Rosa Vice Mayor Victoria Flemming and representatives from the North Bay Labor Council, North Bay Jobs with Justice, and State Senator Bill Dodd. Also in attendance was Seong Brown, whose daughter Elizabeth died by suicide last year.

From Tuesday in Oakland:

From Tuesday in Santa Clara: 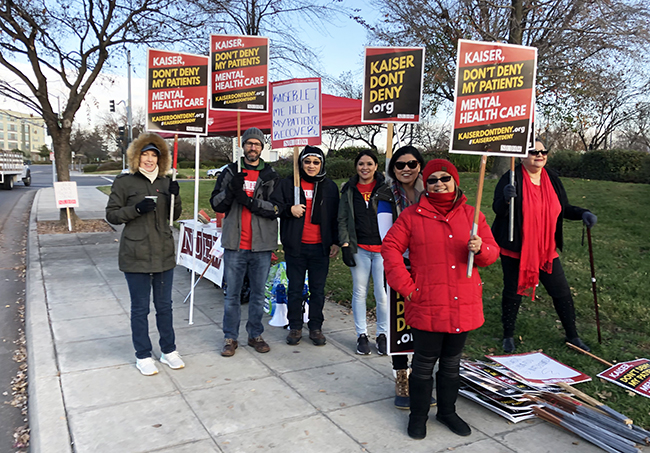 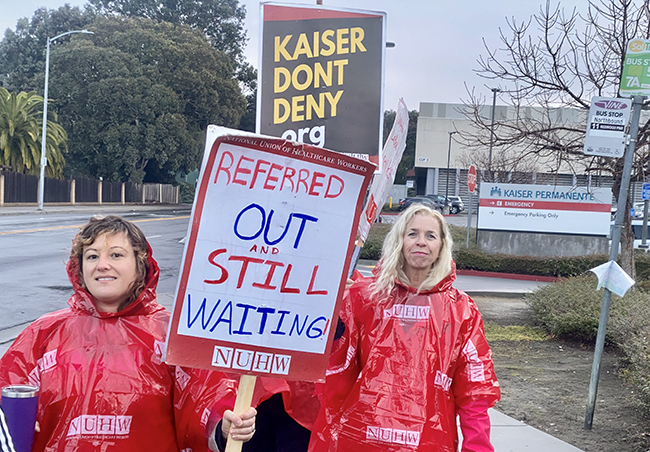 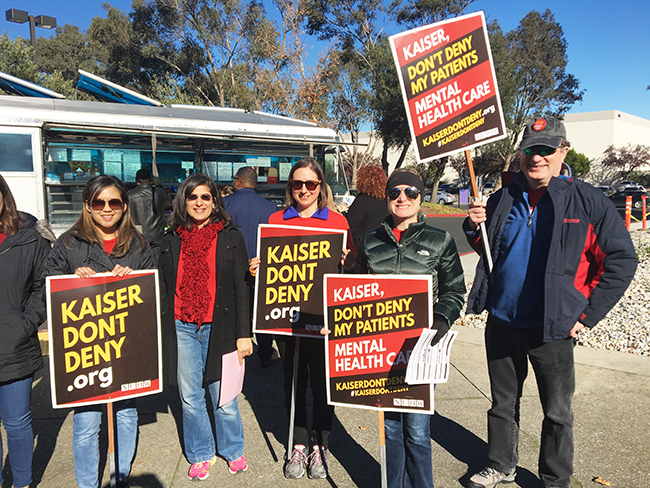 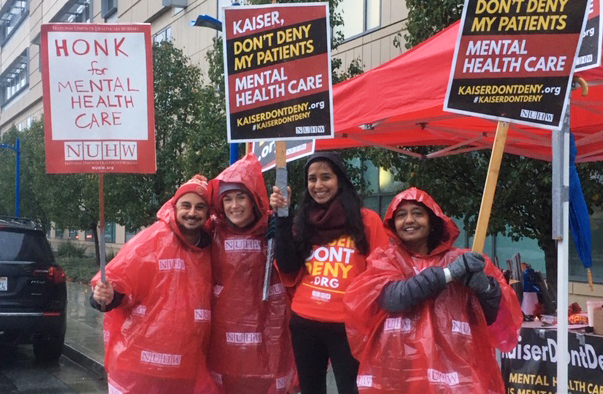 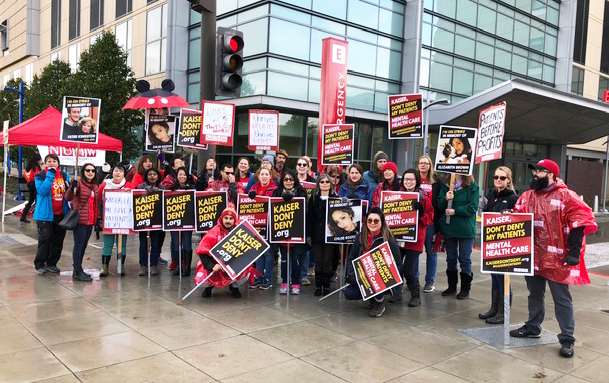 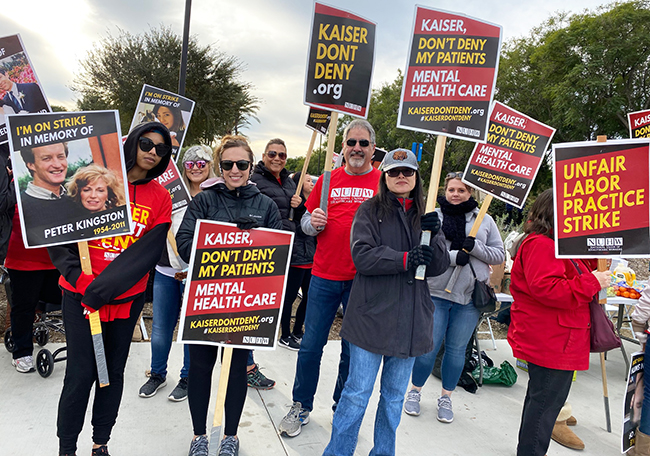 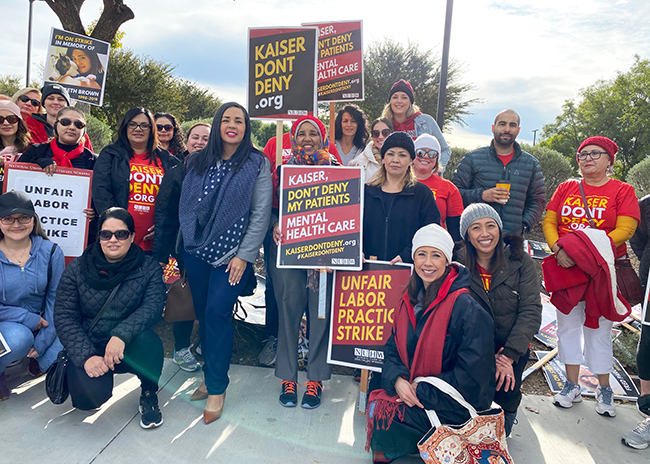 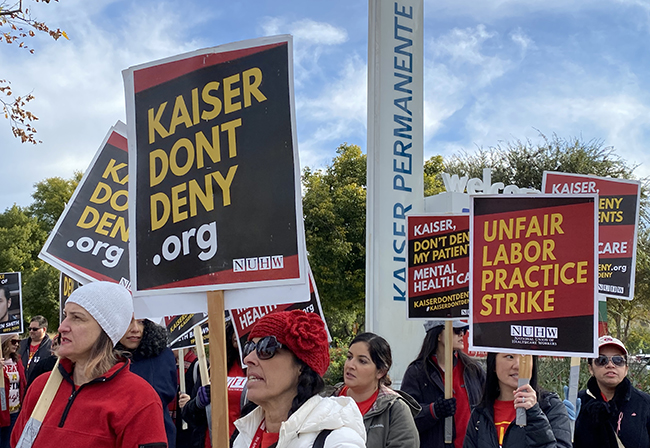 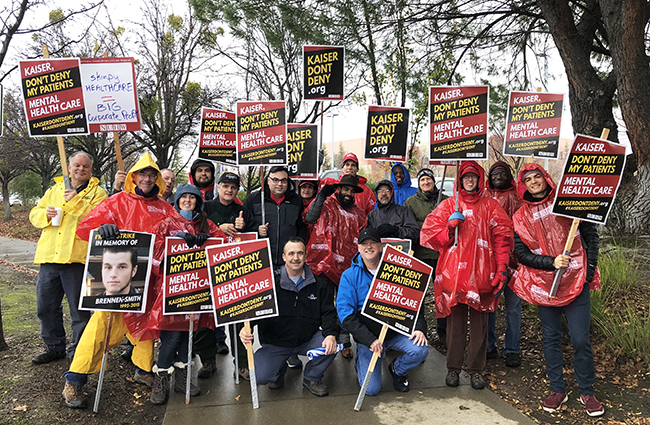 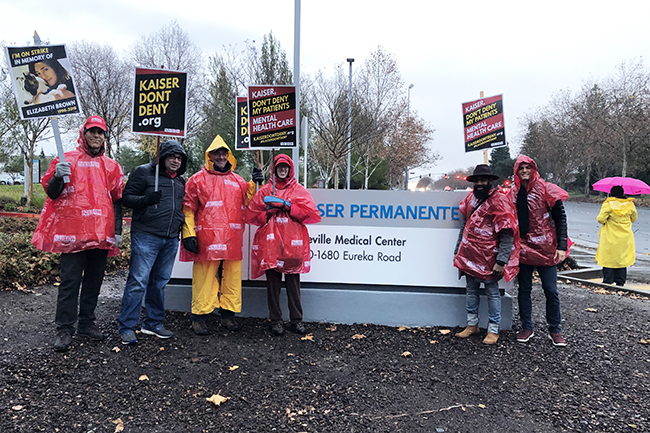 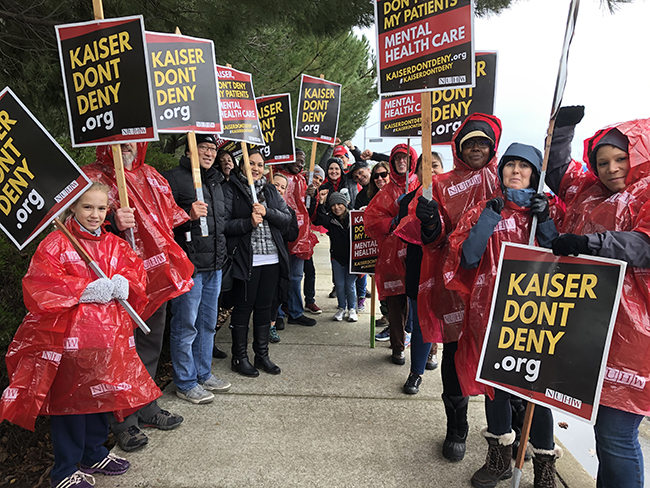 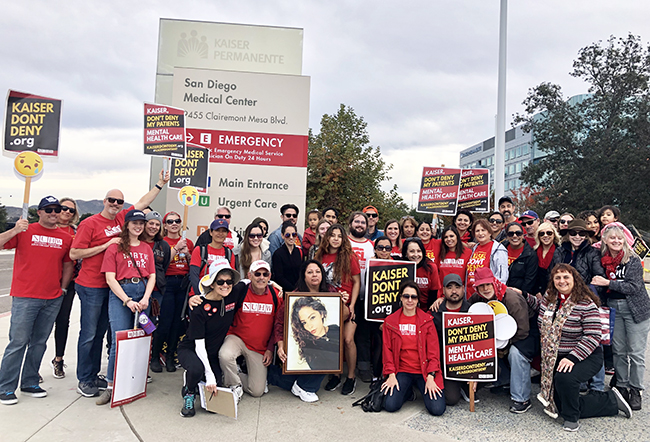 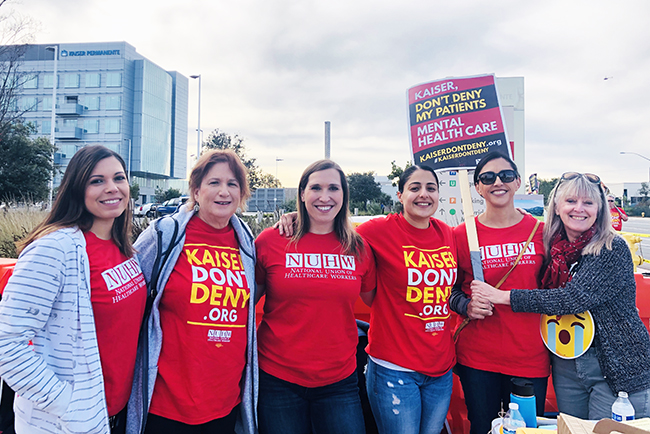 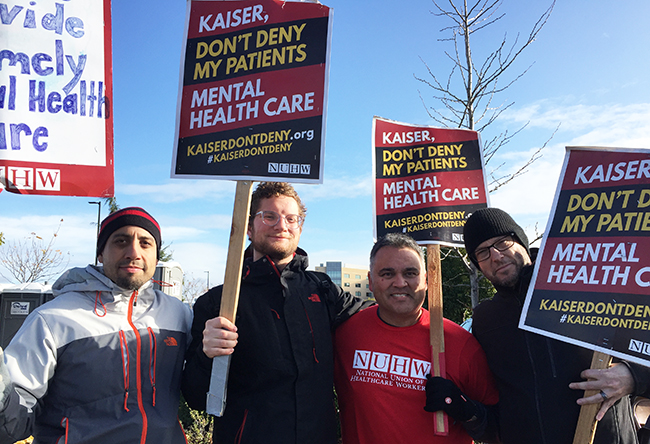 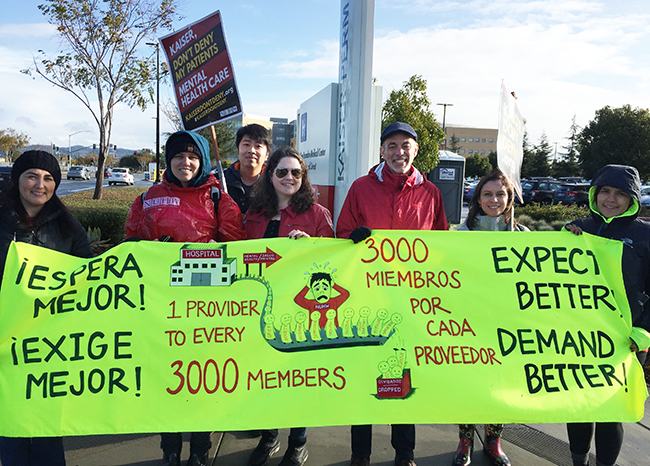 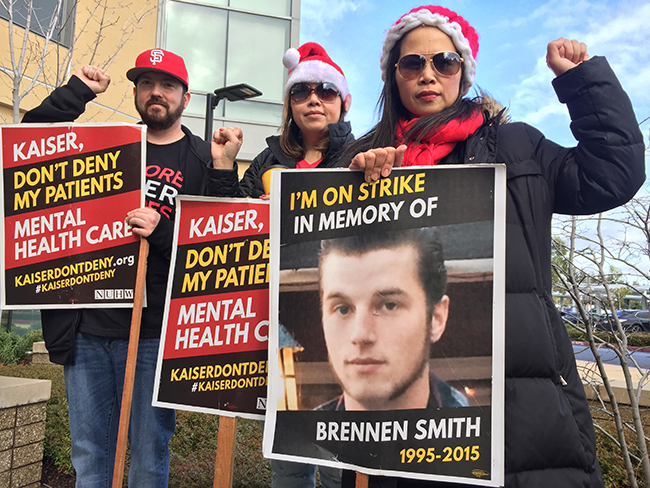 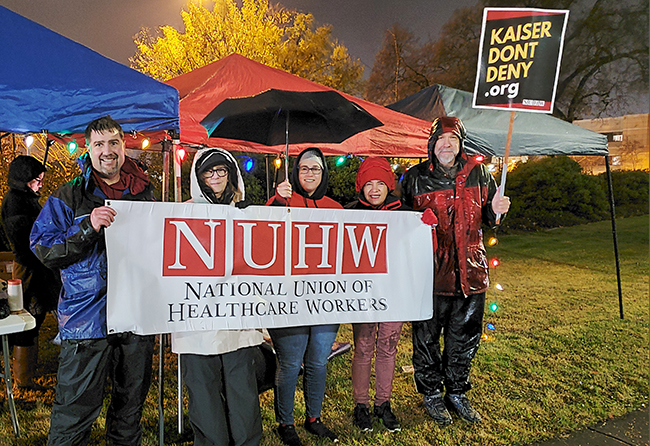 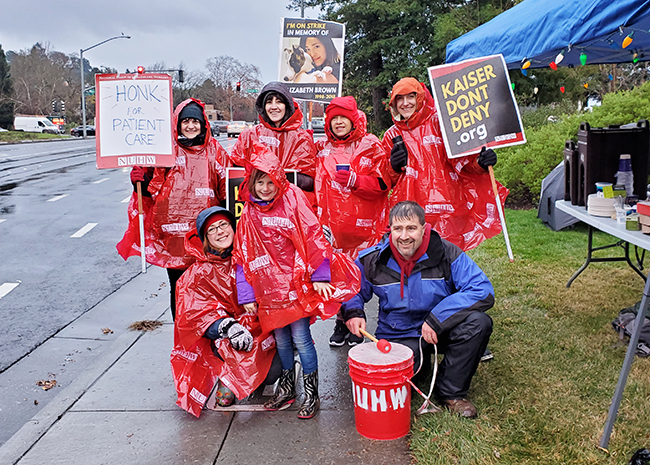 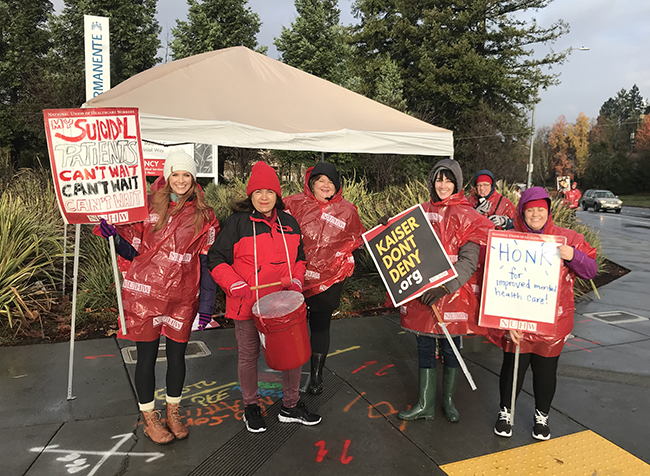 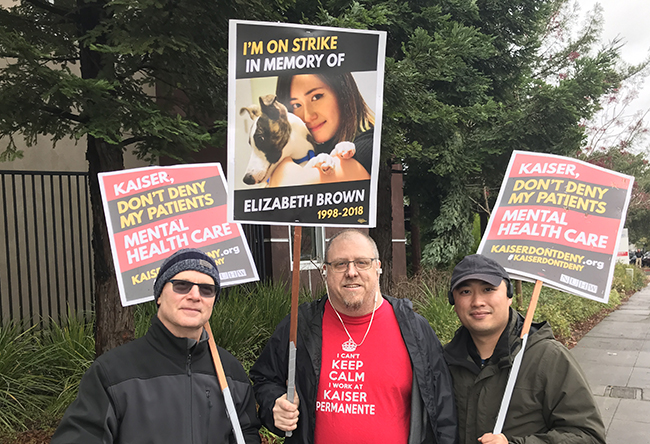 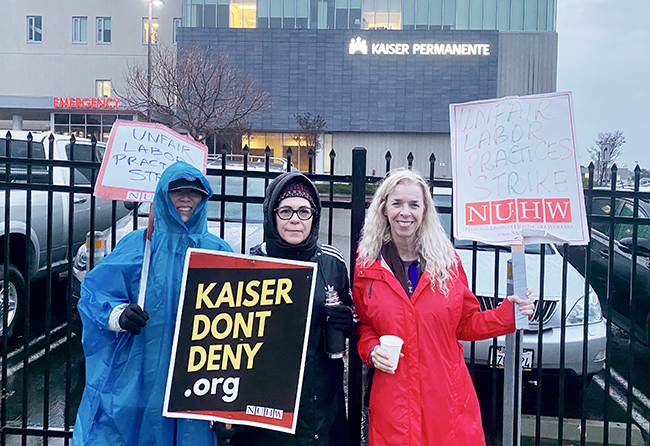 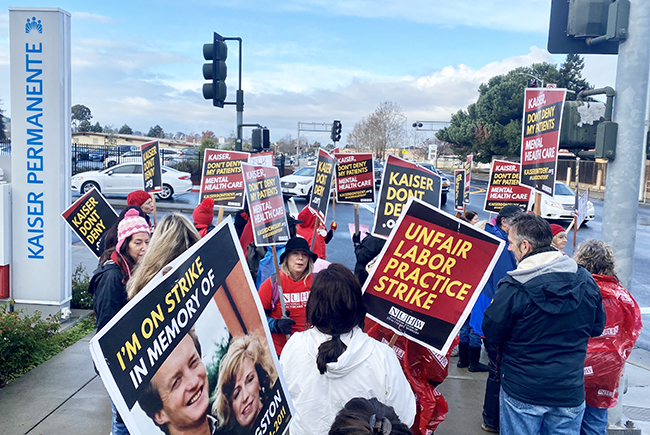 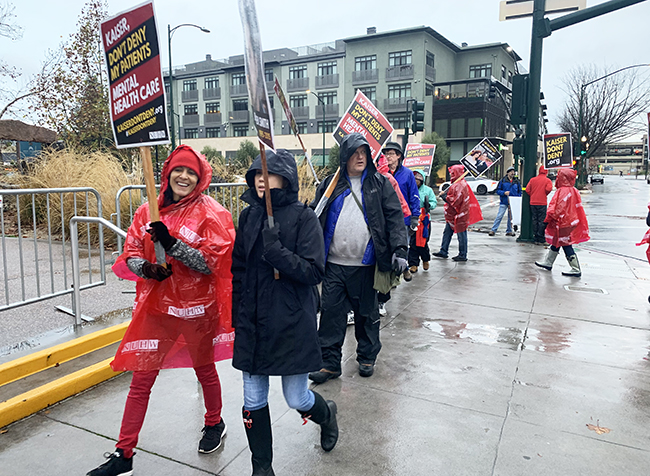 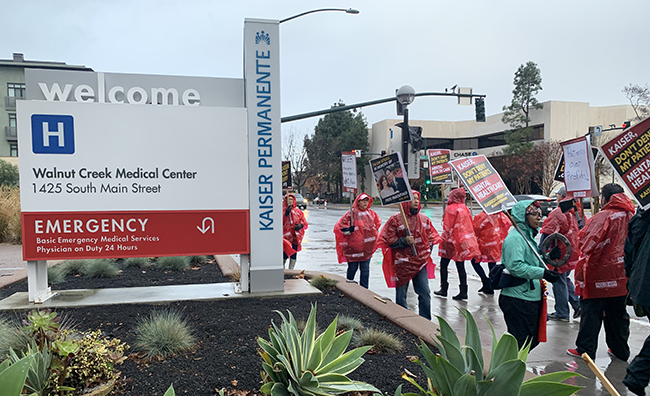 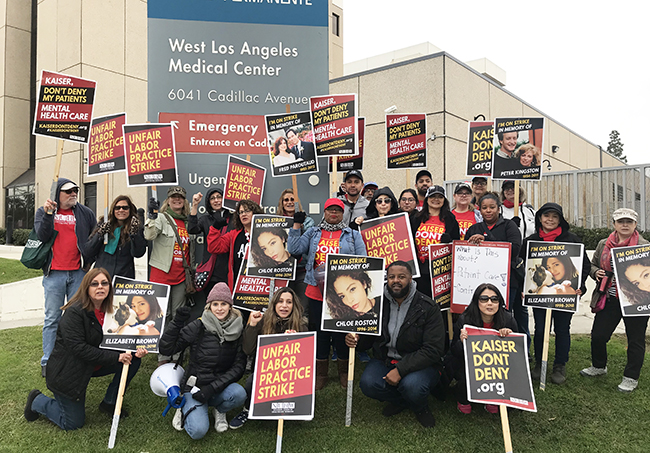