NUHW members streamed to rallies in Los Angeles and Oakland Tuesday in a powerful show of force to Kaiser. In Oakland, we marched more than a mile down Broadway, closing half of the thoroughfare, as we convened for a rally in front of Kaiser corporate headquarters.

And several labor allies picketed with us today in Fresno, including a representative from the office of State Senator Anna Caballero.

Even Senator Elizabeth Warren joined in, tweeting her support for us. 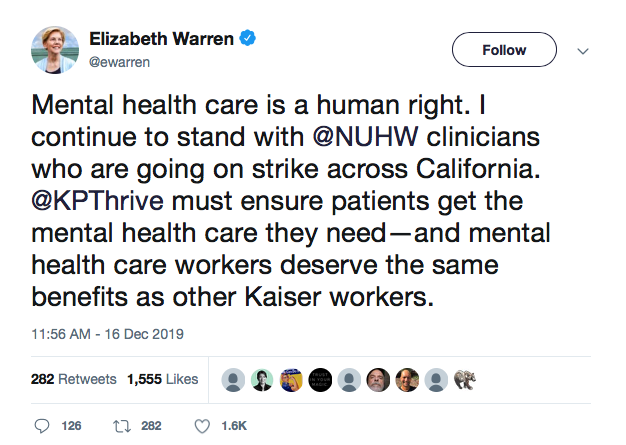 Our power wasn’t only evident on our picket lines Tuesday. After NUHW President Sal Rosselli sent a letter to Department of Managed Health Care Director Shelley Rouillard, demanding that her agency monitor whether Kaiser is meeting timely access standards during the strike, the DMHC issued a press release today inviting patients to inform them of any adverse impacts from the strike.

In the release, Rouillard reiterated that the DMHC expects health plans to comply with timely access standards “during any labor strike,” and invited anyone who had an appointment inappropriately rescheduled to call its helpline at 1-888-466-2219.

This is a clear message to Kaiser that there is a price to pay for refusing to bargain in good faith and settle a fair contract. If you know of anyone who has had their appointments rescheduled this week, please ask them to call the DMHC hotline.

We had lots of strong community and political support at both of today’s rallies. In Oakland, speakers included Assemblymember Buffy Wicks as well as Oakland City Councilmembers Nikki Fortunado Bas and Dan Kalb. Our picket and rally were covered by KTVU and KPFA.

We continue to get strong support from Kaiser employees including the Stationary Engineers who are on strike with us. Labor federations that have given us strike sanction include the Orange County Labor Federation, Inland Empire Labor Council, Teamsters Joint Council 42, North Bay Labor Council, San Francisco Central Labor Council.

Let’s keep the momentum going on Wednesday. We’ll have pickets from 6 a.m. to 2 p.m. at the following locations:

On biggest rallies on Thursday will be at the State Capitol and Kaiser’s Southern California headquarters in Pasadena. Please note that busses to Sacramento from Modesto, Stockton and Redwood City and been cancelled.