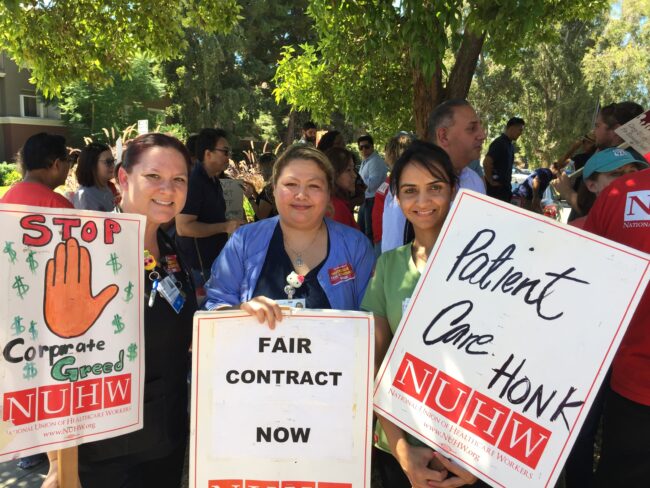 Dozens of NUHW members picketed outside Kindred Brea Hospital September 13 to inform the public about chronic understaffing at the facility.

During the picket, workers voted unanimously to authorize a one-day strike. No strike date has been set.

A recent employee survey found that 80 percent of caregivers reported that their units are understaffed and 95 percent said that boosting staffing was “very important” toward providing high-quality care.

Picketers chanted and carried signs stating, “We deserve a living wage” and “A hospital should not be an assembly line,” according to a report in OC Weekly.

The 87-bed hospital is one of two facilities in Orange County that treats patients for longer stays typically after they are discharged from acute-care hospitals. These facilities are critical components of the health care system, but Kindred, which owns both Orange County facilities, has refused to pay workers enough to avoid rapid turnover that has contributed to rampant understaffing.

During a recent negotiating session, the company’s representatives told workers to get other jobs if they needed additional income.

“We actually had a representative tell us that some of our jobs are not as important as others,” LouElla Crow, a monitor tech, told OC Weekly.

Caregivers want the hospital to ensure that nursing assistants, who feed and bathe patients, never have to care for more than 8 patients at the same time. They often find themselves caring for up to 16 patients at any given time

Caregivers are also demanding a contract that provides competitive wages so they can afford to stay at Kindred and care for their patients.

“Over the last two years, we’ve lost about half our staff to other hospitals,” said Lilliane Ives, a licensed vocational nurse. “We can’t replace them fast enough, and all of us are left caring for more patients than we can safely handle.”