The strike targeting Sodexo, a multi-billion dollar French corporation, was the second this month by NUHW members outside a Tenet hospital. Workers want Tenet, the world’s third largest for-profit hospital chain, to either bring their jobs in-house or compel Sodexo to offer the same wages and benefits they would receive if employed directly by Tenet.

Thursday’s picket came on the heels of a one-day strike by Sodexo-employed housekeepers and cafeteria workers at Fountain Valley Regional Medical Center.

Sodexo worker Maria Roman told OC Weekly earlier this month that she had just received a two-cent per hour hourly wage from $10.98 to $11.

Roman and other Sodexo workers at Fountain Valley are seeking their first union contract with Sodexo.

“We stick together for a fair contract for us, our families and our patients,” Roman told OC Weekly. “We will do whatever it takes!”

Most of the Sodexo workers seeking better wages are women, many of whom are the primary or sole support for their households, providing for spouses and children and in some cases elderly parents.

Several of them are paid so little they have resorted to recycling bottles and cans to help pay for basic necessities. 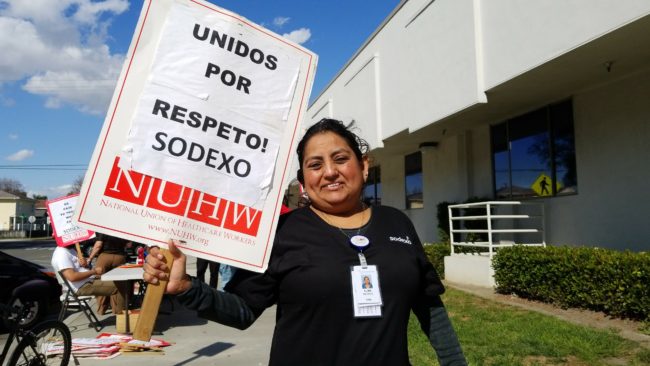