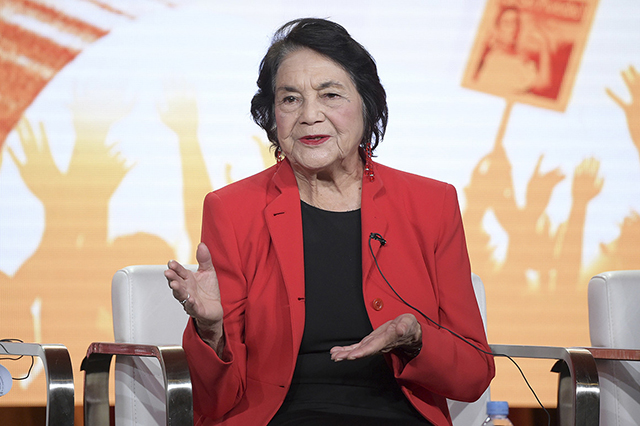 “We can’t forget how the last recall brought us a governor who used ballot measures to attack the rights of workers and vetoed efforts to establish universal health care for all Californians,” said Huerta, who co-founded the United Farm Workers with Cesar Chavez six decades ago.

Huerta added: “The Republicans know they can’t win a regular statewide election. So, they are trying to rig the system with this recall to block critical health care reforms, deny immigrants their rights and delay the progressive changes we need to make California a better place for everyone.

We have farm and food workers risking their lives and dying in shocking numbers to feed people across the country. Our focus needs to be on protecting the vulnerable, ramping up vaccinations, safely re-opening our schools and getting Californians safely back to work. The last thing we need is this right-wing recall.”

“Dolores Huerta is a hero to millions of Californians because she has dedicated her life to helping people work with dignity and fight for their rights,” NUHW President Sal Rosselli said. “Having a leader like Dolores join this fight against the right-wing recall is a tremendous boost to our organizing efforts.”

The anti-recall program has already launched a series of digital advertisements running statewide that ask Californians to pledge to defeat the recall by signing a petition and contributing to the cause. The petition can be found at https://nuhw.org/norecall-courage/.

The National Union of Healthcare Workers is a member-led movement representing more than 15,000 caregivers in California.