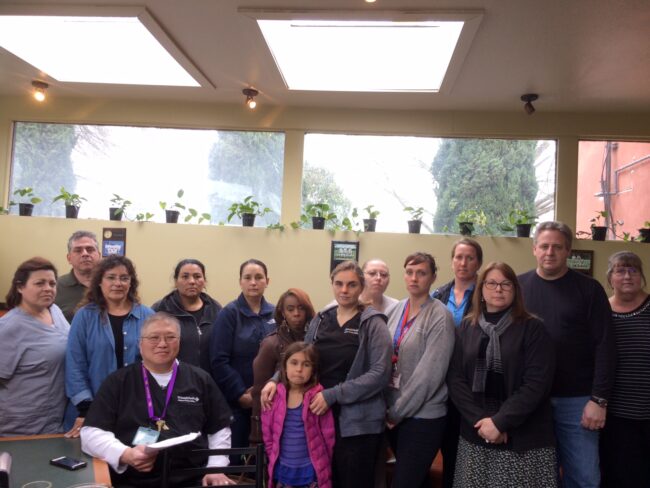 NLRB tells Queen of the Valley to stop breaking the law

The National Labor Relations Board has filed a complaint against Queen of the Valley Medical Center, accusing it of violating federal labor law by “coercing” and “discriminating against” pro-union workers and refusing to bargain in good faith.

Coffman is asking a federal labor board judge to order the hospital to provide data it has withheld, allow the union access to the hospital grounds and begin good-faith bargaining.

She is also asking the judge to take the unusual step of ordering the hospital’s human resources director to read workers a notice spelling out their rights and how the hospital violated them. A labor board official would have to be present at staff meetings to confirm that the hospital complied.

“The fact that the NLRB wants a Queen administrator to verbally explain to employees how the hospital violated their rights – rather than merely posting a notice inside the hospital – shows the severity of the Queen’s anti-worker behavior,” NUHW President Sal Rosselli said.

Anacelia Trejo, a hospital cook, added, “We are thrilled that the labor board director took this action, and we are determined to continue standing up for ourselves and our patients against the Queen’s undemocratic actions — in the courtroom, in the political arena, in our hospital and here in our community.”

Coffman found sufficient evidence that Environmental Services Director Bruce Herring “threatened employees with unspecified reprisals for engaging in union activities.” She further found that the hospital’s human resources director denied an employee’s request to be represented during a meeting with supervisors that could have led to discipline.

Both actions amounted to “restraining and coercing employees” in the exercise of their federal rights, she wrote.

Coffman also found evidence that hospital administrators changed work schedules for employees because they “assisted the union.” The administrators, she added, were seeking “to discourage employees from engaging in these activities.”

Moreover, Coffman found that the hospital had refused to bargain in good faith and denied multiple requests from the union for information such as salary data and workplace rules that are “relevant to the union’s performance of its duties.”

“From the moment we began organizing, Queen executives have tried to intimidate us and bully us out of forming a union,” said Ray Herrera, a radiology technician. “They clearly don’t want a workforce with the power to shine a light on how they have compromised patient care to further increase their profits.”

The National Union of Healthcare Workers decisively won an election late last year to represent the workers, who include nursing assistants, pharmacy technicians and respiratory care practitioners, but the hospital has sought to overturn the result. After losing two appeals, Queen of the Valley announced in March that it would file a lawsuit against the federal labor board, arguing that the result should be overturned because the board conducted the union vote by mail rather than inside the hospital. Ninety percent of all eligible voters cast ballots in the vote-by-mail-election.

NLRB complaint Queen of the Valley