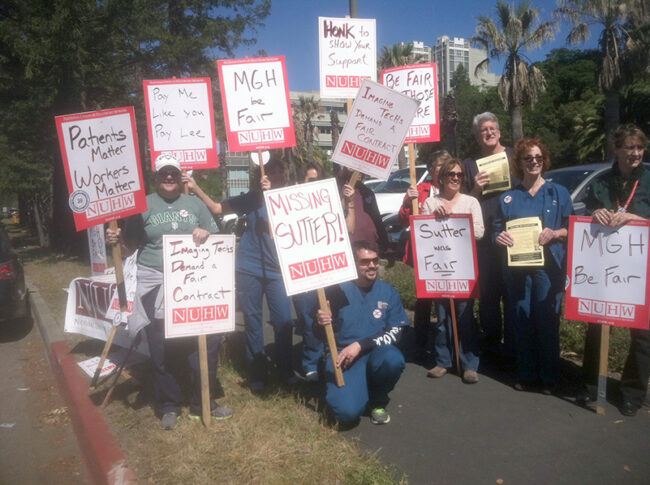 Click here to read coverage by the Marinscope chain of weekly community newspapers.

Despite the hospital’s profitability, in more than a dozen bargaining sessions since the union contract expired in October, Marin General’s administration has demanded unacceptable concessions from the technologists that no other Marin General union has accepted. Meanwhile, as Marin General attempts to force cuts on its frontline caregivers, it is compensating its executives lavishly. Marin General paid CEO Lee Domanico a salary in excess of $1.3 million in 2013 — an increase of 43 percent over the previous year. Other top executives received salary increases of 12 to 20 percent from 2011 to 2012.

Among the cuts Marin General is trying to push on its imaging technologists:

• Marin General wants the technologists to grant the hospital the right to unilaterally alter their health benefits during the term of the contract. The hospital also wants to raise their healthcare costs and co-pays.

• Marin General wants workers to accept a low-ball wage offer that would make it difficult to keep up with the cost of living. The technologists have not seen a wage increase since October 2012.

• Marin General wants to convert shift differentials and standby compensation from a percentage of each worker’s pay to a flat rate so that, over time, these forms of compensation would be steadily eroded by inflation.

“We will not accept these concessionary demands,” said Lead MRI Tech Danny Darr. “Marin General and its executives are making plenty of money while asking us to settle for less. And unlike executives, we actually take care of patients.”