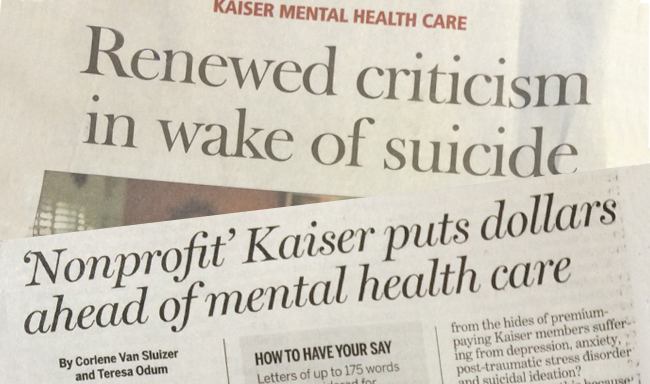 First, there was the tragic suicide of a Santa Rosa woman suffering from depression. The Santa Rosa Press Democrat reported that Barbara Ragan, two days after being told by Kaiser that she should have to wait eight weeks for a therapy appointment, committed suicide by jumping from Kaiser’s three-story parking garage while clutching her Kaiser card in her hand.

It was a “statement,” her husband said, about the way Kaiser treats its mental health patients.

Kaiser again made the news in a two-part report on mental health parity laws. The Kaiser Health News radio story, “Strict Limits on Mental Health Care Still Common for California Patients,” was broadcast on multiple National Public Radio affiliates August 16 and a slightly different written version appeared on the stations’ websites. Retired Kaiser Oakland psychologist and NUHW member Melinda Ginne, who endured retaliation by Kaiser for advocating for her patients, was interviewed for the story.

The first story in the series, “Advocates Say Mental Health Parity Law Is Not Fulfilling Its Promise,” ran August 3.

On August 16, the Oakland Tribune, San Jose Mercury News, Contra Costa Times, and several other Bay Area News Group newspapers published an op-ed, “The Ugly Side of Kaiser Permanente’s Mental Health Failings,” written by two Kaiser patients who have endured delays and denials of mental health care. In the wake of Barbara Ragan’s suicide, Santa Rosa resident Corlene Van Sluizer shared her own story of fighting Kaiser for adequate care for her sister, and Teresa Odum of Orange County shared her story of struggling to obtain treatment for grief and depression following the death of her daughter, Jennifer Rivera Odum, in a car accident.

Both women had previously shared their stories on Courage Campaign’s TheRealKaiserPermanente.com website and had supported Courage’s promotion of that site in ads placed on Bay Area Rapid Transit trains. Kaiser, after having obtained confidential information about the ads, mounted its own ad campaign on BART the very same day. Kaiser’s ads undermined the women and the truth of their experiences by characterizing Courage’s ads and website as a labor tactic to discredit what Kaiser calls its “top-rated” mental health care.