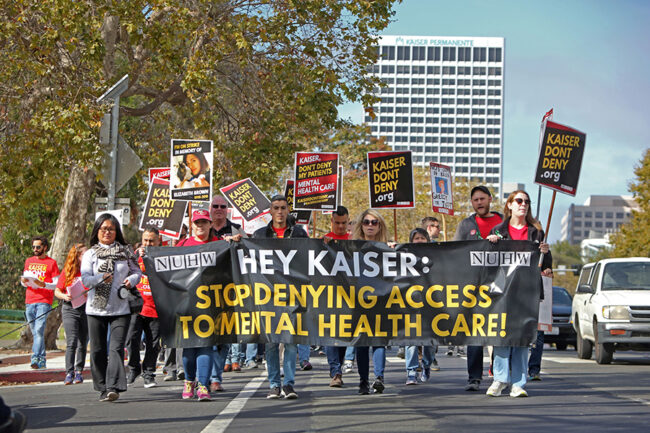 Kaiser Permanente psychologists, therapists and social workers in Northern California and Hawaii voted overwhelmingly in October to authorize a strike in response to the HMO’s rejection of its proposals to improve access to mental health care.

The NUHW-represented clinicians have not submitted a formal strike notice to Kaiser, and no strike date has been set. The strike authorization comes as Kaiser Stationary Engineers in Northern California are entering their second month of an open-ended strike and the Alliance of Health Care Unions announced that 36,000 members, including more than 24,000 workers in Southern California and Hawaii, have authorized a strike against Kaiser.

“We’ve been at the forefront in exposing Kaiser’s greed in underfunding mental health care and forcing patients to wait months between therapy appointments,” said Mickey Fitzpatrick, a Kaiser psychologist in the Bay Area. “Now, we have the opportunity to stand together with other unions and show that Kaiser’s greed is harming patients.”

News of the strike authorization was covered by several news outlets including the San Francisco Chronicle, Modern Healthcare and Becker’s Hospital Review.

Kaiser mental health clinicians in both Northern and Southern California have been without a contract since October 1, while clinicians in Hawaii are seeking their first contract. In negotiations, Kaiser has rejected our proposals to increase staffing, recruit more bilingual and minority therapists and ease unsustainable caseloads that are causing increased turnover at Kaiser clinics.

Kaiser is refusing to consider any proposals pertaining to staffing even though it will need to hire many more clinicians to comply with SB 221, a new California law sponsored by NUHW, that requires health insurers to provide follow-up mental health therapy appointments within 10 business days unless the clinician determines that a longer wait would not be detrimental. Currently, many Kaiser patients are being forced to wait two months between therapy appointments.

In separate negotiations with clinicians in Southern California, Kaiser, which has reported a $13.8 billion profit over the last two years, made a two-tier wage proposal that would result in significantly lower wages for clinicians hired after 2022. The proposal would also pay newly hired workers significantly less if they work in the Inland Empire or Kern County, even though those regions have relatively fewer mental health clinicians.

“Kaiser’s proposal in Southern California is a red flag that it has no intention of fixing its broken mental health care system or complying with state mental health access laws,” NUHW President Sal Rosselli said. “For Kaiser to propose massive pay cuts for future mental health clinicians at a time when patients are waiting months to see their therapist is a slap in the face to everyone who believes in parity for mental health care.”