Kaiser recently agreed to improvements in patient care and compensation for therapists on the mainland, but insists on paying therapists in Hawai’i far less and refuses to boost service for patients in need.

HONOLULU — Striking mental health therapists joined by community leaders will protest Mon. Oct. 31, at 11 a.m., outside Kaiser Permanente’s corporate offices in Honolulu to demand that the HMO provide equal treatment for its therapists and patients in Hawai’i.

Last week, the giant HMO reached an agreement with mental health therapists in Northern California that included significant improvements for therapists and the patients they serve. In stark contrast, Kaiser has dug in its heels in Hawai’i, refusing to address its understaffing crisis and has made matters worse by insisting that its therapists in Hawai’i also accept far lower wages and poorer benefits than their counterparts in Northern California — despite a higher cost of living and a heavy caseload for each therapist.

Mental health workers in Hawai’i, represented by the National Union of Healthcare Workers, are demanding a contract that addresses severe understaffing that leaves patients in Hawai’i waiting months for therapy sessions in violation of clinical standards and state law. Kaiser canceled a bargaining session in Hawai’i that was scheduled for Tues. Oct. 25 and is refusing to resume negotiations until Nov. 8. Improvements in patient care and compensation for therapists in Northern California were only agreed to after a 10-week strike by NUHW members ended earlier this month.

“Kaiser is not treating Hawai’i on par with California, and that is not OK,” said Andrea Kumura, a licensed clinical social worker at Kaiser’s Waipio Clinic. “We haven’t asked for everything Kaiser now provides in Northern California. What we’re asking for is modest and affordable. Kaiser simply refuses to provide adequate mental health care in Hawai’i and doesn’t want to change. They want to shortchange the people of Hawai’i.”

WHAT: Picket line and news conference outside Kaiser’s corporate offices to demand that Kaiser settle the strike in Hawai’i on similar terms as agreed to in Northern Calif.

Earlier this year, the National Committee for Quality Assurance downgraded Kaiser’s accreditation status in Hawai’i placing it under “corrective action” for deficiencies in providing accessible mental health care. The agency concluded that the lack of access to mental health care posed “a potential patient safety risk” and that “Kaiser’s prior efforts to improve access… have largely been ineffective.” Currently, Kaiser is the only health plan in Hawai’i under corrective action.

In responding to its accreditation agency, Kaiser officials listed “lack of available candidates… to fill internal vacancies,” as its biggest challenge. However, even though Hawai’i has a higher cost of living than California, the HMO is insisting on paying most therapists in California at least 20 percent more in starting salaries than their counterparts in Hawai’i and even more to stay with Kaiser long term. 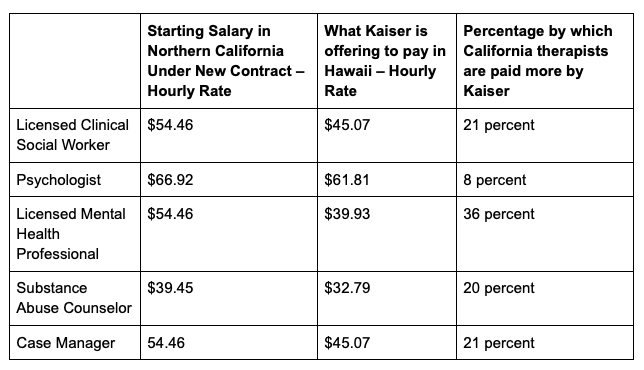 The wage discrepancy is even higher than it appears. In Northern California, Kaiser has agreed to a wage scale with guaranteed raises every year, while in Hawai’i, Kaiser is insisting on a single starting wage rate with no guarantees of raises as therapists gain more experience.

There are other major differences in what Kaiser has agreed to in Northern California and what it’s offering in Hawai’i that will affect the HMO’s ability to recruit and retain therapists.

“Everyone should be outraged by Kaiser’s second class treatment of its Hawai’i mental health therapists and patients,” State Sen. Laura Acasio said. “Hawai’i is an afterthought to Kaiser, and the only way to change that is to support our striking therapists and demand equal treatment.”

The National Union of Healthcare Workers represents more than 16,000 healthcare workers in California and Hawaii, including 58 Kaiser mental health providers who provide treatment to 266,000 Kaiser enrollees at seven medical facilities and a call center on Oahu, Maui, and the Big Island.