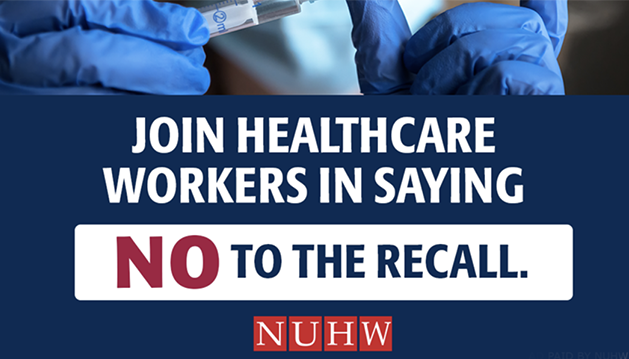 EMERYVILLE, Calif. — Courage California is joining with the National Union of Healthcare Workers (NUHW) to organize voters against the Republican-led recall of Gov. Gavin Newsom.

Courage California is a multi-issue progressive organization that organizes communities in-state and nationwide to fight for equity, justice, and accountability. Courage California emailed its statewide membership this week, calling on them to join the NUHW-led anti-recall campaign.

“Progressives are uniting against this partisan and wasteful recall because we understand this is a direct attack on our shared priorities,” said Irene Kao, Executive Director of Courage California.  “This recall is not about Gavin Newsom — it’s about subverting resources and the will of the people to stop progress on universal healthcare, environmental protections, tenants’ rights, racial justice and many other priorities that are supported by a vast majority of Californians.”

“If we don’t unite to defeat the recall, we will lose our best chance to achieve critical progressive reforms in California,” said Rosselli, who also sits on Courage California’s Board of Directors. “We need our leaders to focus on a safe and equitable recovery from a pandemic that has devastated our members and communities. A recall threatens the progress we need now to support the health and safety of all Californians.”

NUHW last month formed a committee, Caregivers and Californians Against the Recall, that has won the endorsement and financial support of political leaders throughout California, including state Assembly Speaker Anthony Rendon, Lt. Gov. Eleni Kounalakis and State Treasurer Fiona Ma. The anti-recall program has already launched a series of digital advertisements asking Californians to pledge to defeat the recall by signing a petition at https://nuhw.org/norecall-courage/.

“We simply can’t be out-organized by the right-wing Republicans,” Rosselli said. “This recall will be defeated on the ground by progressives going door-to-door helping Californians understand what’s at stake. The support of Courage California will super-charge our organizing efforts allowing us to reach millions with our message: If you care about California’s values of equity and justice, you must vote NO on the recall.”

The National Union of Healthcare Workers is a member-led movement representing more than 15,000 caregivers in California.

Courage California, formerly Courage Campaign, works to unite communities organizing for progressive change, fight the forces of corruption, and hold our representatives to account in order to ensure that California’s elected officials act with courage. Our community of members envision California as a model of progressive, equitable, and truly representative democracy that sets the standard for our country. www.couragecalifornia.org