The nation’s largest nurses union said Thursday it would team up with a union representing other health-care workers, seeking to make the combined entity the dominant labor group in the fast-growing health-care sector.

The groups’ decision to join forces intensifies their rivalry with the powerful Service Employees International Union.

The California Nurses Association and the National Union of Healthcare Workers said the affiliation was aimed at preventing hospital chains from scaling back benefits for employees and fighting for workplace standards needed to improve patient care.

But the combined unions are also expected to aggressively campaign against the SEIU in organizing union drives, including one of the biggest of the year at health-care giant Kaiser Permanente, with 43,000 workers at stake. The workers, represented by the SEIU, will vote on whether to remain with that union or join the strengthened NUHW.

“Our members are all there for them,” said Deborah Burger, co-president of the nurses union. Under the agreement, the health-care workers union will largely keep its autonomy, but its members will pay dues to the nurses union.

The California Nurses Association, which represents 85,000 nurses in the state, also belongs to National Nurses United, an umbrella group with 100,000 additional members in states including Massachusetts, Michigan, Florida and Texas. 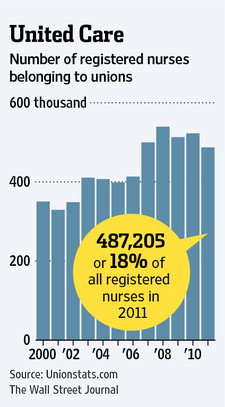 Both the NUHW and the SEIU represent health-care workers including nurses’ aides, laboratory technicians, office staff and support staff such as food-service workers. The SEIU also includes some nurses—about 85,000 of its two million members.

Ms. Burger said the nurses union chose to work with the NUHW, which represents 10,000 health-care workers, and challenge the SEIU for members, saying the SEIU has been driving down benefits at hospital chains by agreeing to concessions, doing “everything but climb into bed with the employers” to create “a faux union.”

Sal Rosselli, a former SEIU official who now heads the NUHW, said teaming up with the nurses union “will give us the resources to be much more effective.”

Kaiser Permanente is “entirely neutral” in the dispute between the NUHW and the SEIU, said John Nelson, a company spokesman. He denied a claim by the NUHW that the company had given support that enabled the SEIU to win an election for the 43,000 workers in 2010, which was challenged in court. “We have not inappropriately supported or assisted either union, nor will we do so in the future,” Mr. Nelson said. A judge investigating the NUHW claims against the company dismissed them.

The National Labor Relations Board ordered another election after the judge found the SEIU had threatened workers, saying they would be denied previously bargained wages increases if the NUHW won. Mr. Trossman said the SEIU didn’t believe the judge’s decision was accurate but chose not to challenge it.

Some labor experts said the combined unions would be the first dedicated to representing various health-care workers, potentially giving them a leg up in drives over the SEIU. The affiliation “can lead to an increase in organizing because you have two of the more militant organizing groups coming together,” said Michael Lotito, a San Francisco-based attorney with Littler Mendelson who represents employers during union drives.