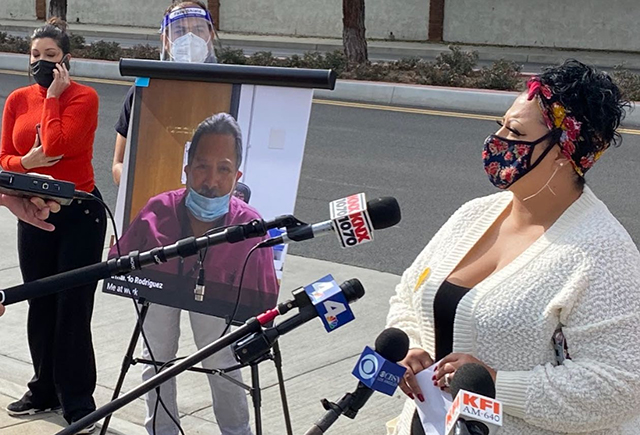 Workers from Los Alamitos Medical Center and Lakewood Medical Center joined their colleagues at Fountain Valley Regional Hospital to launch a unity campaign pushing for stronger Covid safeguards at all three hospitals as well as fair treatment for dietary and EVS workers whose jobs are subcontracted to a company that pays poverty wages.

The workers gathered together on November 23 outside Fountain Valley Regional where they welcomed the support of Irene Santos, whose father, Armando Rodriguez, a radiology technician at Fountain Valley, died of COVID-19 earlier this month.

Workers at Fountain Valley started organizing for stronger safety protocols in July after Rodriguez was instructed to come to work even after informing his supervisors that several of his family members at home had contracted COVID-19. Rodriguez, who colleagues lovingly called “The Candyman,” ultimately exposed several colleagues to the virus and came down with it himself. After a long battle, he died on November 6.

“I was shocked that my father was told to continue working,” said Santos, who lived with her father and three other family members. “He was clearly exposed. It didn’t make sense for him to go to work in a hospital and risk exposing his coworkers.”

The action was covered by the Los Angeles Times, Voice of OC and Telemundo, as well as KNX news radio, KFI radio and the local CBS and NBC television stations.

Fountain Valley Regional Hospital, Lakewood Medical Center and Los Alamitos Medical Center are all owned by Tenet Healthcare, a Fortune 500 company that was cited by state regulators for “systemic” infection control violations in connection with a complaint spearheaded by NUHW members.

Despite some improvements in response to the state report, the Tenet hospitals are still refusing to test most caregivers even after they have been exposed to the virus. Workers are calling for the hospitals to test them monthly and following any exposure. They are also calling for all patients to be tested upon admission.

“The lack of testing has resulted in far too many caregivers either contracting COVID-19 or being unnecessarily exposed,” said Mailinh Nguyen, a nursing assistant at Fountain Valley who had to get her own test and self-isolate after treating a patient who wasn’t initially tested and was later determined to have the coronavirus. “The only way to protect us and our patients, and make sure that our hospitals are adequately staffed during the upcoming surge is to implement mandatory testing. It’s hard to believe that football players are getting tested everyday by their employers, but caregivers treating COVID-19 patients can’t get tested at all.”

The workers are also seeking improvements for subcontracted dietary and EVS workers, many of whom can’t afford the health insurance offered by their employer, Compass.

As the pandemic has unfolded, there has been rapid turnover of subcontracted workers, resulting in frequent understaffing. The workers, who make on average less than $16 per hour, are asking Tenet to employ them directly, which would result in better wages and benefits and could help reduce turnover and understaffing.

“I clean the rooms of Covid-19 patients, but I can’t afford health insurance for my family,” said Eunice Zamarano, a housekeeper at Fountain Valley, who had to pay $130 for a COVID-19 test earlier this year because she doesn’t have health insurance. “It’s scary. My 13-year-old has asthma. Right now, I’m going to have to make an appointment for him. He has to use an inhaler, and it’s almost gone.”