Courage Campaign, an online advocacy organization with more than 1.3 million members, honored NUHW-represented Kaiser mental health clinicians with the 2016 United in Courage Award May 10, 2016, at the Citizen Hotel in Sacramento.

From the 2016 United in Courage Awards program:

In 2011, NUHW revealed that Kaiser Permanente — the state’s largest health insurer — was intentionally limiting the amount of mental healthcare a patient could receive, in order to cap costs and increase profits. The human toll was staggering. Countless families came forward with stories of unnecessary suffering and, at times, suicide, when care was denied. 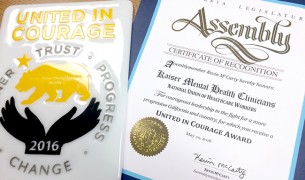 In response, the Kaiser Mental Health Clinicians — including nearly 3,000 psychologists, psychiatric social workers, therapists, and psychiatric nurses working at hundreds of Kaiser clinics throughout California — stood united in challenging Kaiser’s misinformation and advocating for a model of care that honors patients’ rights by enabling clinicians to provide timely, appropriate care.

For five years, they sacrificed regular wage increases and the security of a contract, never wavering amid Kaiser’s attacks on their motivations, credibility, clinical judgment, or professional ethics.

At the end of 2015, their campaign led to Kaiser hiring five hundred additional clinicians, and in December, the clinicians won a contract with an unprecedented appointment-scheduling ratio to guarantee regular, ongoing treatment for patients who need it, as well as a trigger mechanism that requires Kaiser to hire more clinicians if it fails to achieve that ratio.

Over the past year, Courage Campaign was humbled to stand with the clinicians in their historic fight to improve mental health care for millions of Californians, creating a website where victims shared their stories (theRealKaiserPermanente.com), publishing multiple op-eds, and running an ad campaign on BART near Kaiser’s Oakland headquarters to educate the public about the abuses.