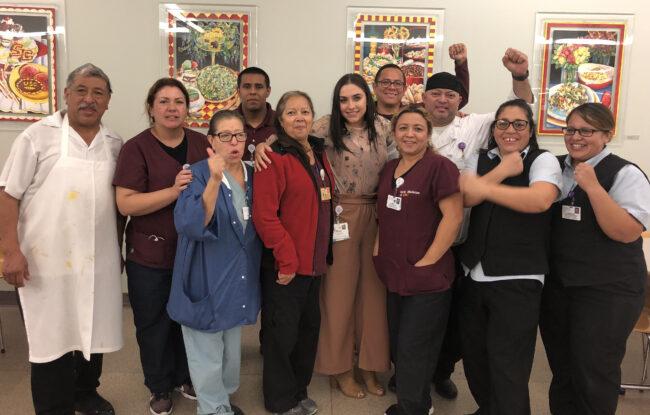 The agreement not only makes USC one of the region’s highest-paying hospital systems, but it guarantees that more than 80 cafeteria workers whose jobs had been outsourced to Sodexo, a French conglomerate that pays pennies above the minimum wage, will become direct university employees.

“We stood united and we won!” said Judy Oliva, a Sodexo worker. “Because of our determination and unity, our jobs and families’ lives will be forever changed. USC benefits and pay is a major victory for us!”

USC agreed to in-source Sodexo workers at Norris last year, but had refused to do so at Keck until our members made clear that they wouldn’t settle a contract that let their co-workers be treated like second-class citizens.

The contract will increase wage scales at the hospitals and boost wages on average 14.9 percent with several workers receiving raises topping 50 percent over the three-year contract. The contract also includes ratification bonuses ranging from $750 to $1,850 for full-time and part-time workers and $500 for per diems.

It took hard work and relentlessness to win the contract. Members picketed, petitioned and marched on the administration. A final agreement was reached after workers had authorized a three-day strike.

“We took a strong stand and won a strong contract that will make Keck and Norris two of the highest-paying hospitals in Southern California,” Jesus Salgado said. “Each contract continues to bring important improvements, and I’m excited to keep growing our membership and our power at USC.”