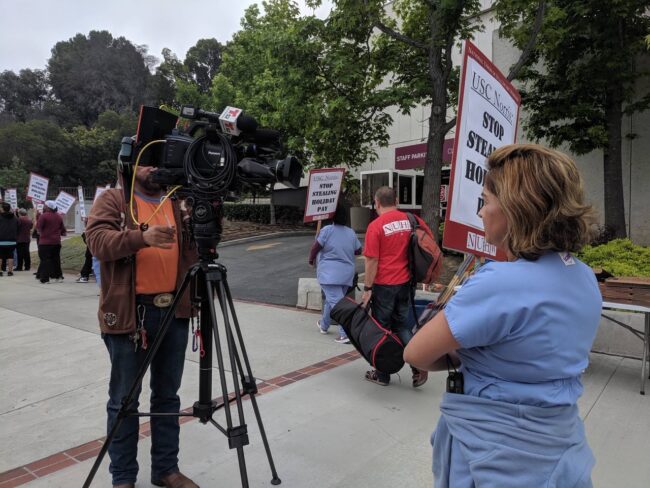 More than 200 University of Southern California Workers picketed Wednesday, May 15 to protest the university’s sudden elimination of nine paid holidays in violation of their union contract. The new policy, which went into effect in February, will cost 140 nursing assistants, housekeepers, medical technicians and other workers a combined $300,000 per year in lost wages.

“This is the most cynical, selfish thing I can remember USC doing,” said Oscar Vargas, a radiation therapist who has worked at USC Norris for 16 years. “I was at negotiations. We agreed that there would be no changes to holiday pay. For USC to now renege on that agreement and take away money we need to support our families is unconscionable.”

In February, USC eliminated 9 paid holidays for workers at the university’s Norris Comprehensive Cancer Center in what workers believe is retaliation for their union’s continued organizing of USC workers. The workers received holiday pay for many years, and their most recent contract, which was ratified last year, left holiday pay unchanged.

However, the university reinterpreted portions of the contract in an attempt to justify rescinding holiday pay for cancer center employees beginning with President’s Day. The university imposed its new policy shortly before more than 100 other USC employees were scheduled to vote on whether to join NUHW.

NUHW, which one those recent organizing elections, has filed a complaint against USC with the National Labor Relations Board, seeking to restore the paid vacation days. Many of the picketers Wednesday work at Keck Hospital of USC, which has a different paid-time-off policy in their contract.

“Workers are united as never before to defend each other against the university’s illegal takeaways,” NUHW President Sal Rosselli said. “USC is anti-worker. The university’s administration has a $5.5 billion endowment, yet they are cruelly taking money away from dedicated caregivers who for years have been told that they are part of the Trojan Family.”