Back to USC, Don't Silence Me 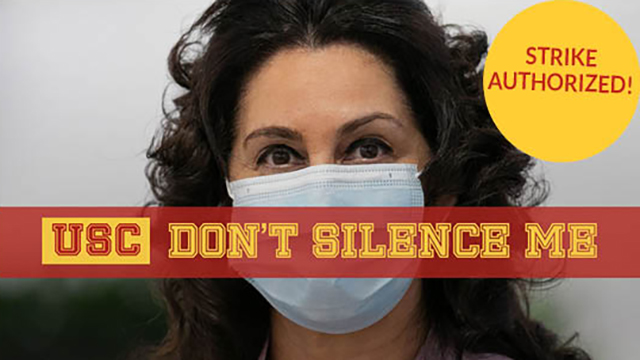 Vote sets stage for more than 1,500 workers to potentially strike university-run hospitals and clinics next month

LOS ANGELES — More than 1,500 healthcare workers at Keck Hospital of USC, USC Norris Comprehensive Cancer Center and several university clinics and call centers have authorized a 5-day strike. After a week of voting, more than two-thirds of workers cast ballots and 96 percent of the ballots cast supported the strike authorization.

No strike date has been set, and negotiations are scheduled to resume Thursday.

The workers, who include nursing assistants, respiratory therapists, housekeepers, medical technicians and licensed vocational nurses represented by the National Union of Healthcare Workers, are fighting to improve wages, protect their health and retirement benefits and preserve their right to inform the public about conditions inside their hospitals.

“USC has mistreated its caregivers during the pandemic,” said Patricia Barahona, a patient care technician at Keck Hospital of USC. “We’ve put our lives on the line for our patients; meanwhile the university has cut our retirement benefits, made it harder for us to take sick leave and refused to offer hazard pay to maintain staffing even during the worst days of the COVID-19 surge.”

USC cancelled its annual 5 percent contribution to employee retirement accounts last year, and has so far rejected proposals from healthcare workers to reverse the takeaway.

At the bargaining table, USC is also:

Caregivers protested outside Keck Hospital of USC last year against the university imposing rules that limited sick leave and imposed harsh penalties on workers who need more time to recover from illnesses or take care of their sick family members. That protest, which took place just one month before California’s first shelter-in-place order, would have been forbidden under the university’s current proposal.

“We can’t provide the care our patients deserve, if we can’t inform the public of problems we see in our hospitals,” April Henriquez, a support coordinator at Keck Hospital of USC. “We don’t want to strike, but we’ve been through too much to let USC cut our benefits, put our safety at risk or prevent us from speaking out and advocating for our patients.”