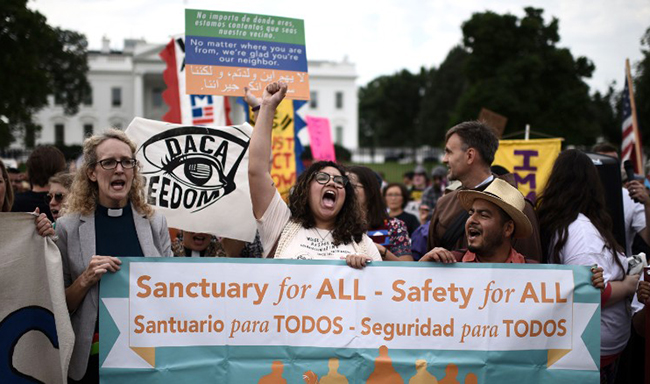 If Trump really wants economic fairness, it’s not DACA he needs to reverse

This op-ed was originally published in the HuffPost.

For someone who’s made a fortune off the labor of low-paid foreign-born workers, President Donald Trump should be the last person accusing them of being a threat to our safety and prosperity.

But without a shred of evidence, the president tried to cloak his heartless decision to end the Deferred Action for Childhood Arrivals (DACA) program as a public safety and economic justice measure.

DACA provides work permits and prevents deportation for approximately 800,000 undocumented immigrants who were brought to this country as children, have lived here for at least five years and have clean criminal records.

But in a statement released by the White House, President Trump said: “Only by the reliable enforcement of immigration law can we provide safe communities, a robust middle class and economic fairness for all Americans.”

It’s hard to know whether the president ever sincerely believes what he says, but this statement is pure cynicism.

If the president truly cares about economic fairness, why is he letting his Labor Department roll back a rule that would make 4.2 million workers eligible for overtime pay, and delay another rule requiring financial advisors to act in the best interest of clients who are saving for retirements?

And why has he nominated two pro-management lawyers to the National Labor Relations Board, the agency charged with protecting the rights of workers?

If the president truly cares about rebuilding a robust middle class, why is he threatening to sabotage the Affordable Care Act, knowing that it will lead to major premium spikes that could price insurance out of the reach of many middle class families? And why is he pushing for huge corporate tax breaks that will further enrich the 1 percent, while eviscerating funding for programs that all of us rely on to have safe water to drink and clean air to breathe?

Trump will not make our communities safer by sending immigration officers to round up young people living in the only country they have ever known. Instead, he will force people striving for the the American Dream to live in constant fear of deportation.

Once again, the president has shown that the only people he won’t turn his back on are the hardcore nationalists who form the bulk of his declining base of support.

President Trump declared in his acceptance speech at the Republican National Convention that he would “do everything in my power to protect our LGBT citizens.” Then, eight months into his presidency, he announced a ban on transgender people from the armed services.

He also repeatedly talked about his “love” for the Dreamers, calling them “incredible kids.” But on Tuesday, September 5, his administration issued a “talking points” memo that read, “The Department of Homeland Security urges DACA recipients to use the time remaining on their work authorizations to prepare for and arrange their departure from the United States….”

Who will Trump betray next?

While the ball is now in Congress’ court to pass legislation protecting the Dreamers, we at the National Union of Healthcare Workers will continue to stand with them and our elected leaders in California, who are committed to resisting this heartless attempt by the president to tear families apart.

Earlier this year, we declared ourselves a sanctuary union. That means we’ll provide legal assistance to any of our families facing deportation and make defending our members from Trump’s deportation dragnet as high a priority as defending them from management retaliation.

Our members decided to do this not out of some phony pretense, but because they know it’s the decent thing to do.

As former President Obama said in response to Trump’s announcement to end DACA, “This is about whether we are a people who kick hopeful young strivers out of America or whether we treat them the way we’d want our own kids to be treated.”