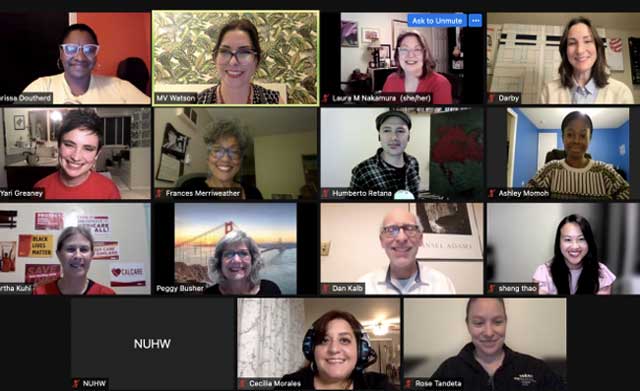 Since affiliating with UCSF in 2014, Children’s Hospital Oakland has seen fewer patients, while UCSF’s children’s hospital in San Francisco’s Mission Bay neighborhood, which opened in 2015, has seen its patient census consistently grow.

On Dec. 1, NUHW members at the hospital joined with community and elected allies, to share their concerns that UCSF is transferring critical medical services to its San Francisco children’s hospital, forcing East Bay families to travel farther for care that used to be closer to home.

“I’ve had to help a mother take her child to Mission Bay because we no longer provided the care in Oakland,” said Peggy Busher, a social worker at UCSF Benioff Children’s Hospital Oakland, said before the Town Hall, which was organized and moderated by workers. “Having to cross the bridge is a major financial and logistical burden for so many families, and there is no excuse for UCSF not to provide a full array of services for East Bay children.”

The Town Hall was covered by KTVU and Oaklandside, which has previously covered concerns about UCSF’s stewardship of the hospital.

UCSF Benioff Children’s Hospital Oakland is one of five Level One pediatric trauma centers in California, and it accepts all patients no matter their income level or insurance status. While the affiliation which effectively put UCSF in control of the nonprofit Oakland hospital was touted as the best approach for strengthening the hospital’s finances, doctors and other caregivers in the East Bay have raised repeated concerns about critical services being moved to San Francisco.

“I’ve had families call to ask why they have to go to San Francisco when they want to go to Oakland or our satellite clinic in Walnut Creek,” Cecilia Morales, an office assistant at Children’s Hospital Oakland, said during the Town Hall. She added that a majority of the ones “being funneled to the city” have private insurance.

Martha Kuhl, a hematology/oncology nurse at the hospital said that UCSF has refused to honor multiple requests for information about the transfer of patients across the Bay, and that the number of pulmonologists in her department has been more than halved since the UCSF affiliation.

Fran Merriweather, who has worked at Children’s Hospital Oakland for more than 30 years, said that her program providing extended services for East Bay families who received care in the hospital’s Neonatal Intensive Care Unit has suffered under the UCSF affiliation. “I’ve noticed the exodus of experienced staff who get to know families; what their struggles are; and what ways they need help,” she said.

Ashley Momoh recalled going to Children’s Hospital as a young girl when there were book fairs and Christmas parties and finding a much colder environment when she last received care several years ago. Momeh, who has a chronic illness, was concerned to hear that the services she received as a child had been cut in recent years. “As someone who has chronic pain and had to drive 45 minutes to get care, I can’t imagine having to take a longer trip into San Francisco.”

Assemblymember Mia Bonta and Oakland Councilmember Sheng Thao shared their experiences taking their children to Children’s Hospital Oakland prior to the affiliation and thanked workers for speaking out. In response to worker testimony about services being moved to San Francisco, Oakland Councilmember Dan Kalb said, “We have to pull back and fix that.”

Patient census down in Oakland since Affiliation

The Dec. 1 Forum is the latest effort by caregivers to draw attention to UCSF’s stewardship of Children’s Hospital Oakland. In 2018, approximately 120 doctors at the hospital signed a letter to UCSF Chancellor Sam Hawgood declaring “no confidence” in UCSF’s integration plan that they said had prioritized UCSF’s Mission Bay campus in San Francisco. Earlier this year, registered nurses and elected officials held a Town Hall forum to discuss their concerns about declining services in the East Bay.

Reports filed by UCSF with the California Office of Statewide Health Planning and Development document that from 2017 to 2019 — despite the fact that the East Bay has a significantly larger youth population — the number of recorded Patient Days dropped every year at Children’s Hospital Oakland from 46,465 to 43,072 and increased every year at Mission Bay from 83,793 to 85,555.