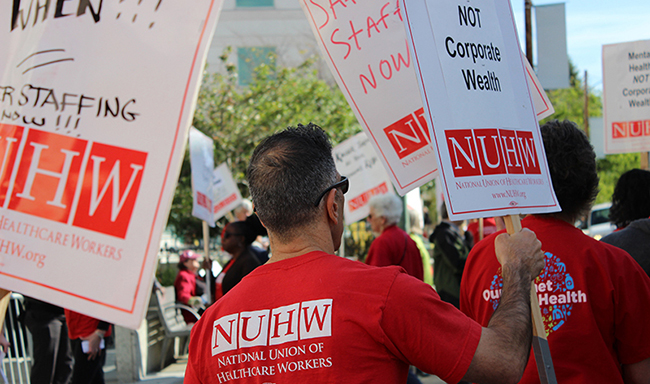 After a five-year struggle, members in three of NUHW’s four Kaiser units have ratified contracts and negotiations to settle the fourth are underway.

In fact, after five years and several strikes, they won a contract that benefits not only their patients, but their fellow Kaiser workers in 30 other unions too.

Clinicians will be free to continue their patient advocacy efforts; the agreement gives them access to binding arbitration for unjust disciplines and terminations. “We still have a long way to go to achieve mental health parity at Kaiser, and in the country as a whole,” said Clement Papazian, IBHS president and a psychiatric social worker at Kaiser’s Oakland Medical Center, in a story he published in Labor Notes, “but this agreement is a good first step.”

As part of the deal, Kaiser settled comparable contracts for the Psych-Social and Health Care Professionals in Southern California and negotiations are underway in the Optical unit. Earlier this year, Optical workers accepted an offer from Kaiser that included retro pay, only to see Kaiser later renege on the deal. The National Labor Relations Board agreed with NUHW that Kaiser had acted illegally by failing to honor the agreement and the NLRB is scheduled to go to trail against Kaiser in January unless Kaiser settles sooner as promised.