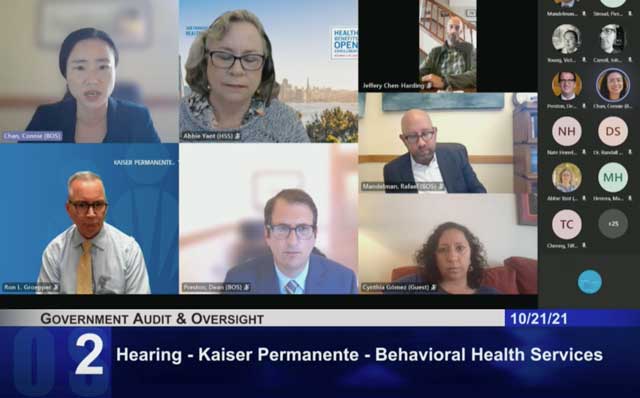 NUHW-represented mental health clinicians revealed the truth about Kaiser’s broken mental health system during a first-of-its-kind hearing before the San Francisco Board of Supervisors.

Mission Local reported that Supervisors Dean Preston “seemed in disbelief” during the nearly-three hour hearing that Kaiser had no internal data showing how long patients were waiting for mental health therapy appointments after their initial assessment.

Amid repeated questioning from Preston, Kaiser officials claimed the HMO was not tracking average waits for return appointments and insisted that wait time is not necessarily an indicator of proper mental health care.

The board’s three-member Government Audit and Oversight Committee scheduled the October 21 hearing in response to persistent complaints that Kaiser was making many of the city’s 135,000 employees and retirees wait far too long for needed mental health care.

The hearing was the first step for San Francisco to use its power as a major purchaser of Kaiser insurance to demand greater accountability from the HMO for its poor delivery of mental health services.

Chen-Harding told Supervisors he switched jobs at Kaiser because as a generalist, he “found it so demoralizing to have to constantly tell people yes, you should be getting care next week, and I cannot get it to you.”

Describing the care Kaiser provides as “a travesty” on an ethical level, Chen-Harding described taking a call on Oct. 15 from a mother seeking care for her child. “It is not an easy thing to tell a parent they’re going to have to wait a month and a half… and if someone told me I had to wait for my kid, I’d be furious,” Chen-Harding said. “And patients should be furious about this.”

Chen-Harding also countered Kaiser’s claim that there aren’t enough therapists to provide timely care, even though a 2019 report from the nonpartisan Legislative Analyst’s Office found that the Bay Area has the highest concentration of mental health professionals per capita in the state.

“This idea that Kaiser cannot attract and maintain staff, I don’t buy it,” he said. “I don’t buy it because I know… other members of the therapy profession who will not work at Kaiser and don’t understand why I worked at Kaiser because they know it’s demoralizing.”

The biggest false claim that Chen-Harding and Marcucci-Morris refuted was Kaiser’s assertion that Kaiser patients can get return appointments as frequently as their therapists suggest 84 percent of the time.

The 84 percent statistic for return access Kaiser provided is the result of a template problem. Clinicians are asked by Kaiser managers to select how much time the patient is waiting, but the template says the recommended time, so even when I do not recommend that time, my instruction is to choose the amount of time between now and the booked appointment.

Chen-Harding walked the supervisors through how Kaiser manipulates its charting templates and how managers have attempted to intimidate therapists who advocate for patients to be seen more frequently, but don’t have time in their schedules to see them.

“If (therapists) don’t comply, they get in trouble,” Chen-Harding said. “That’s why Kaiser meets its return access 84 percent of the time. It’s not because they’re providing clinically recommended care.”

After hearing from the therapists, the committee members agreed to continue looking into Kaiser’s delivery of mental health.