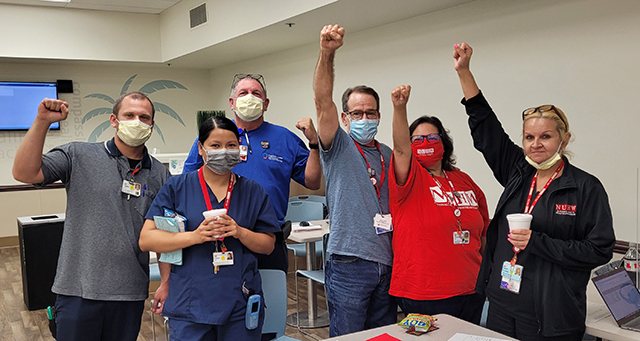 On the same day that Tenet Healthcare announced a $257million second-quarter net profit, nearly 1,000 NUHW members employed at three Tenet hospitals in Southern California authorized a strike that could begin as early as next month.

The Los Angeles Times reported on the strike authorization.

Workers at Fountain Valley Regional Hospital, Los Alamitos Medical Center, and Lakewood Medical Center have held numerous protests and rallies over the past year demanding that Tenet properly staff hospitals and stop its practice of subcontracting.

Tenet has subcontracted housekeeper and food service jobs at the hospitals to Compass Group, a Fortune Global 500 company whose low wages and high healthcare premiums have left many workers without health insurance coverage for themselves or their families during the pandemic.

“Tenet has grown richer during the pandemic, while our hospitals here in Southern California remain dangerously understaffed and many of us can’t afford health insurance,” said Amy Cornelius, a housekeeper at Fountain Valley Regional Hospital. “We have been sounding the alarm throughout the pandemic that Tenet needs to take better care of its patients and workers. Tenet has failed to act. They have left us no choice but to strike.”

Earlier this month, Cornelius and a colleague travelled to Tenet’s corporate headquarters in Dallas for a joint protest with nurses from Tenet’s St. Vincent Hospital in Worcester, Massachusetts, who have been on strike for more than three months.

Despite reaping hefty profits, Tenet is refusing to pay market raises and proposing that workers pay more for their out-of-pocket health insurance contributions. NUHW members are backing calls by Congresswomen Katie Porter, D-Calif., and Rosa DeLauro, D-Conn., for the Biden Administration to investigate whether major hospital companies, including Tenet, misused federal COVID relief funds to bankroll mergers and acquisitions and conduct a hearing into the matter.

In a June 15 letter supporting the request for a federal investigation, NUHW President Sal Rosselli noted that Tenet ended 2020 with a $399 million net profit and $2.5 billion in cash reserves, more than double its cash balance in any quarter during the past 10 years. The company also purchased 45 surgery centers from SurgCenter Development for $1.1 billion and used nearly $500 million in cash to pre-pay debt that was not due for four years.

“Tenet’s profits are coming at the expense of its caregivers and patients,” Rosselli said. “There’s no excuse for Tenet to understaff its hospitals and leave dedicated workers without health care during the worst public health emergency in generations. It’s time for Tenet to stop calling its workers ‘heroes’ and start treating them with dignity and respect.”