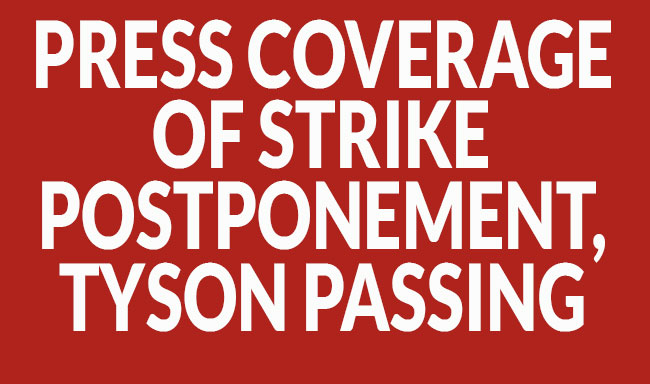 Several major news outlets in California reported on the cancellation of our strike following the sudden death of Kaiser CEO Bernard Tyson. These stories included our perspective on Kaiser’s failure to treat mental health care with the same commitment as its other services.

Here is an excerpt from a story on Tyson’s passing in the Los Angeles Times:

“Our union has demonstrated to them that their mental health system is broken,” Rosselli says. “We’re trying to help them understand that they should collaborate with their mental health clinicians to do the same thing we accomplished in the late ‘90s on the medical side.”

Here is an excerpt from today’s Sacramento Bee story:

Ken Rogers, an Elk Grove psychologist and a member of NUHW’s executive board, said he and his colleagues certainly provide excellent care — but only after Kaiser members wait four to eight weeks to get a return visit.

“We hire the best,” Rogers said. “We have a comprehensive system of care. This is a system that, if looked a certain way, is going to be good, but it’s also a system that is consistently not returning patients quickly enough.”

The backlog of patients makes for dreadful working conditions, Rogers said, adding that he regularly uses personal time to fit in return calls or office visits with patients.

“I’m always giving to the organization, and I’m not getting paid for any of that because I know what their response would be if I went to management and said this was happening,” he said. “They would say, ‘Well, just do less. Work within your hours.’ ”

Here is an excerpt from today’s San Francisco Chronicle:

“We offer our condolences to Bernard’s family, friends and colleagues,” said Sal Rosselli, president of the National Union of Healthcare Workers. “Our members dedicate their lives to helping people through tragedy and trauma, and they understood that a strike would not be appropriate during this period of mourning and reflection.”

Rosselli said he had known Tyson since he was a manager at Kaiser Oakland Medical Center in the early 1980s. “While we had our differences, I had tremendous respect for him and his willingness to collaborate with workers to make Kaiser the model provider of medical services in California. We weren’t able to achieve that same level of collaboration when it comes to Kaiser’s mental health services, but I believed that he did want Kaiser to achieve real parity for mental health care, and I know our members remain fully committed to realizing that goal.”

Here are links to stories that ran today in The Sacramento Bee, LA Times, The SF Chronicle, Mercury News and Orange County Register.