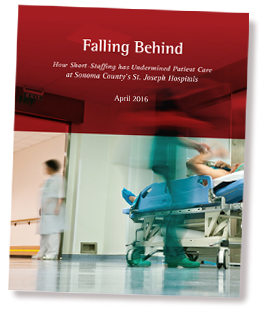 St. Joseph caregivers also  released a video (below) that summarizes the findings. It can be viewed on Facebook here and on YouTube here.

According to the California Department of Public Health’s Licensing & Certification Division, the two hospitals, which together provide nearly half of Sonoma County’s licensed hospital beds, recorded twice as many regulatory incidents per occupied hospital bed than did hospitals operated by Sutter Health or Kaiser Permanente and ten times as many violations of state standards governing the quality of care and treatment. From 2011 to 2015, the CDPH documented more violations of state and federal health standards at Santa Rosa Memorial Hospital than at any other hospital in Sonoma County. St. Joseph’s understaffing has contributed to patient falls, bedsores, risk of infection, and increased possibility of errors in patient care, and state investigators documented multiple injuries suffered by patients at the two St. Joseph hospitals.

“It’s documented proof of what we’ve been saying for years,” said Sue Daly, a licensed vocational nurse at Memorial Hospital for 36 years. “Hospital administrators have refused to heed our warnings about short-staffing and its effects on the care we provide.”

In a survey conducted among NUHW-represented nursing personnel, more than 98% reported that short staffing limits their ability to provide quality care to their patients. Government data confirm nursing personnel’s reports about declining staffing levels. Nursing staffing levels declined by 15.5% from 2011 to 2014, according to the California’s Office of Statewide Health Planning and Development. During the same period, Sutter increased its Sonoma County nursing staff by 39.3% and now has 62% more staff per patient than does Memorial.

“Memorial nurses support our NUHW coworkers in their efforts,” said Sue Gadbois, RN, president of the Staff Nurses Association of Memorial Hospital. “SNA nurses are deeply concerned about inappropriate staffing levels and the negative impact it has on patient safety.”

During the same period that St. Joseph cut staffing levels, the company’s Sonoma County profits skyrocketed. Since 2009, Memorial and Petaluma Valley Hospital together have brought in more than $242 million in profit for St. Joseph. Memorial’s profits are up 1,600% since 2009.

But while profits have soared, turnover has increased due to low staffing levels, lower standards of care, and stagnant wages. St. Joseph caregivers are paid far less than their Kaiser and Sutter counterparts, undermining St. Joseph’s ability to recruit and retain caregivers. On average, St. Joseph’s Sonoma County caregivers make 25% less than Kaiser caregivers and 9% less than those at Sutter. And while it takes a Kaiser worker just seven years to get to the highest wage level, it takes 21 years for a St. Joseph caregiver, meaning they make hundreds of thousands less over the course of their careers. St. Joseph unilaterally implemented drastic benefit cuts on Petaluma Valley workers two years ago and has proposed the same cuts for Memorial workers.

“St. Joseph’s benefit cuts sent morale plummeting at Petaluma Valley,” said Patricia Barnett, a radiology tech at the hospital. “That’s one of the reasons we formed a union — they were cutting staffing levels, cutting benefits, and keeping wages low while making huge profits.”