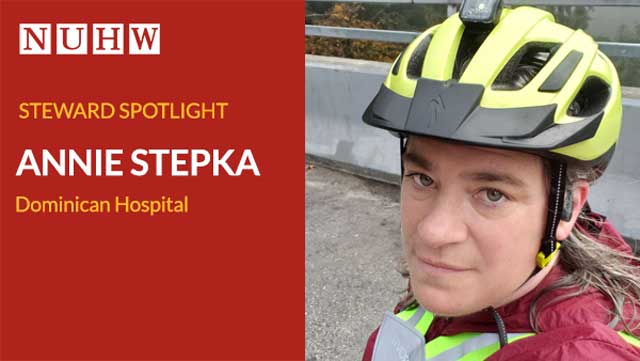 The last year has been a “grind” for Annie Stepka and her co-workers at Dominican Hospital.

To deal with the extra stress of caring for COVID-19 patients, the lead occupational therapist takes to the road.

She’s an avid bike rider who tries to ride her bicycle to work at least twice a week—a 20-mile round trip.

“I have a custom road bike because I’m short,” said Annie, who picked up this hobby before college and even did a 10-day bike tour from Rome to Florence, Italy in 2010.

“My favorite thing is riding a bike,” added Annie, who also enjoys planning the mandolin and also goes on 20-mile hikes on the weekend.

“It helps clear my head. I like the feeling of covering my distances under my own power. It makes me feel strong,” she said.

Strength is also the reason why she led co-workers when they joined NUHW in 2018.

“Being in a union was new to us, and I really wanted to help in the transition because I was invested in it,” she said.

Annie’s been a steward since then, which has helped her to learn to deal with management.

“People think being in a union is about being confrontational, but it’s not,” she said. “It gives you an opportunity to even the playing field in communication and negotiation. Most managers want to work with you.”

Annie said being part of a union helps provide an outlet for disagreements, instead of just getting angry.

“There’s an avenue to solve problems where there wasn’t before,” she described. “And it’s really great to have someone on our side.”

But in the end, it comes down to workers banding together for a shared goal. Stewards are there to help channel those objectives.

“The more people who step up to be stewards, the better for our power and to advocate for each other,” she said.