Whether you’re on the floor caring for patients or working behind the scenes in the Purchasing Department, hospital work can be stressful. Ana Ortiz knows this well; she’s done both.

And she’s taken on a great deal of union work as well. The former certified nursing assistant took part in the unionization effort in 2012 and became a steward in the Northside and Southside skilled nursing facilities. And later, after becoming an expediter, she spearheaded the organizing effort for the Purchasing Department and became a steward when that unit joined NUHW earlier this year. She also helped negotiate for the engineers unit when they joined the union.

She did it all while fighting ovarian cancer, which she was diagnosed with in 2005, when she was pregnant with her third child. With the help of radiation treatments the cancer went into remission, but it returned in 2016. After further radiation treatments and three surgeries, she overcame it once again and has been cancer-free for five years.

Ana’s life was busy and difficult throughout those years, and to find some respite in those challenging times she relied on her family and her faith, but also on a newly discovered passion: Aztec dancing.

For more than a decade, Ana was part of Salinas-based Tlayolotli (Loyalty) Aztec dance group with which she performs at parades and other local events. 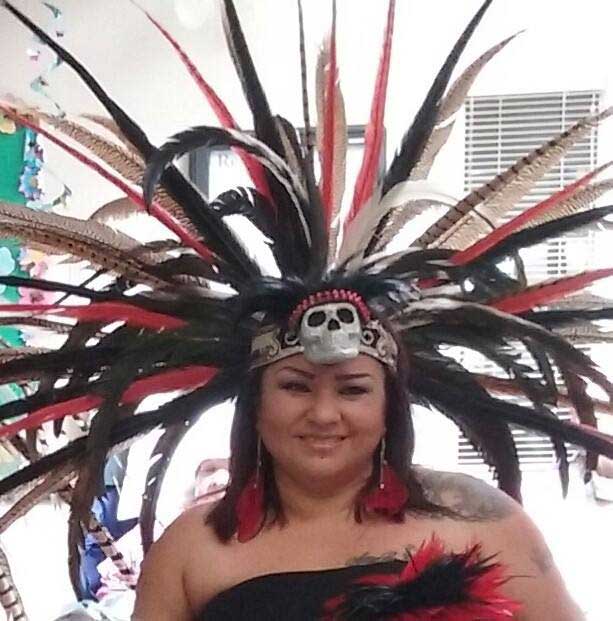 She got into Aztec dance after seeing a presentation at her youngest daughter’s school, and for a time it “became a family thing.” Ana and her three children were part of the group. She and her daughters danced, dressed in colorful and elaborate regalia, and her son played the drums and the concha (sea shell).

“It helped me a lot with stress,” Ana said. “It gave me joy for life, gave me the strength to keep going.”

Practices were Monday evenings and learning to gracefully execute each danza in tandem with her fellow dancers took effort and patience.

“We earn our attire with every dance we learn, starting at the bottom with the zonaja, chachayotes (the nutshells around our ankles), the headdress feathers, and our outfit,” she explained.

The group performed on events such as Dia de los Muertos, Mexican Independence Day, and the day for Our Lady of Guadalupe, as well as marches for farm workers rights, and even weddings and quinceañeras.

“When you’re having radiation and chemo, you’re always very sick. Dancing took a little bit of the pain away,” said Ana. “I always told my kids, ‘Your mom is unbreakable.’ It was a way to show them that even in bad times you still need to find a way to get strong and do the things that make you happy,” she said.

Dancing helped ground her, which also enabled her to better manage the pressures of her job and her role as a steward, to which she devotes considerable time and energy.

“For the union to be strong, everyone has to get involved,” Ana said.

This is especially important when it comes to bargaining, which is about to begin for workers at Hazel Hawkins, who are now in the preparation stages for bargaining set to begin in 2022.

“I tell my coworkers, ‘If you don’t like something in the contract, get on the bargaining committee and make those changes,’” said Ana. “You have to speak up for any changes that benefit you and patient care. You have to get involved in decisions and issues that matter to your department.”

Ana finds her union work gratifying. She has advocated for her co-workers in several departments over the years, and has even helped some of them avoid unwarranted terminations.

“Their gratitude is rewarding,” Ana said. “What I’ve learned is how to talk to management and negotiate. I don’t like to argue with somebody, but I go to HR and I say to them, ‘How are we going to solve this?’”