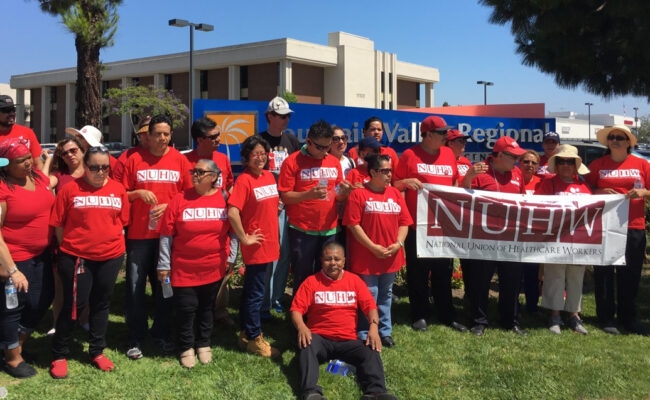 OC Weekly kicked things off on January 23. The Orange County Register published an op-ed (below) on Januray 25. And the Daily Pilot, a Los Angeles Times-owned paper, published a story on January 31.

From the Orange County Register, January 25:

But what about the working-class people employed by those corporations? How are they faring?

We don’t have to look far to find out.

Full-time housekeepers and food-service workers at three highly profitable local hospitals, owned by Tenet Healthcare, are paid so little that they need to collect and recycle aluminum cans to pay for necessities.

The people who fill these jobs are often women, many of whom are the primary or sole support for their households, providing for spouses and children and in some cases elderly parents. Three of them told their stories in a video that has been shared widely in the community since it was released Jan. 14 by the National Union of Healthcare Workers.

Despite working 40 or more hours per week cleaning and disinfecting patient rooms, laboratories, and operating rooms, these women need to spend many more hours collecting cans on the street, in their neighborhoods, and at farmers’ markets. They use the additional $80 to $150 they earn each month to pay utility bills or to buy gas to get them to and from their jobs.

Though the stock market is booming and corporate tax rates are getting slashed, Tenet and Sodexo still refuse to do right by their employees. And they aren’t just cheating their workers; they’re also cheating taxpayers. Many of their underpaid workers qualify for taxpayer-funded programs like Medicaid and food stamps.

That’s why the workers are taking action. On Feb. 1, Fountain Valley Regional workers are staging a one-day strike to demand better pay and benefits and increased staffing levels.

Unfortunately, Tenet’s refusal to pay a livable wage is emblematic of its focus on profits over patient care. The hospitals’ low wages, high turnover, and chronic short staffing undermine patient-safety and infection-control standards.

For two years in a row, the federal Centers for Medicare and Medicaid Services ranked Tenet’s Los Alamitos Medical Center among the hospitals with the worst rates of hospital-acquired infections.

In 2016, the California Department of Public Health cited Fountain Valley Regional for 16 separate violations of the state’s infection control program, including failure to train and equip housekeeping staff to disinfect crucial patient care areas, including the Pediatric Intensive Care Unit and the Operating Room.

Meanwhile, Tenet and Sodexo are only getting wealthier. Each brings in more than a billion dollars a year. Fountain Valley Regional raked in $49 million in profit in 2016. Los Alamitos Regional made nearly $18 million. Lakewood Medical Center made more than $11 million.

And thanks to the GOP tax plan, they’re going to be making a lot more. Earlier this month, Tenet’s CEO Trevor Fetter, who is slated to receive a $22.9 million severance package, announced that the tax cuts would save the company $10-20 million annually.

Will that money trickle down?

If history is any guide, no. Over the past eight years, while health care workers recycled cans to pay the bills, the industry boomed as the Affordable Care Act funneled millions of new customers into the market, filling the coffers of insurers and providers.

Tenet and Sodexo are getting richer, but they’re leaving their workers behind.