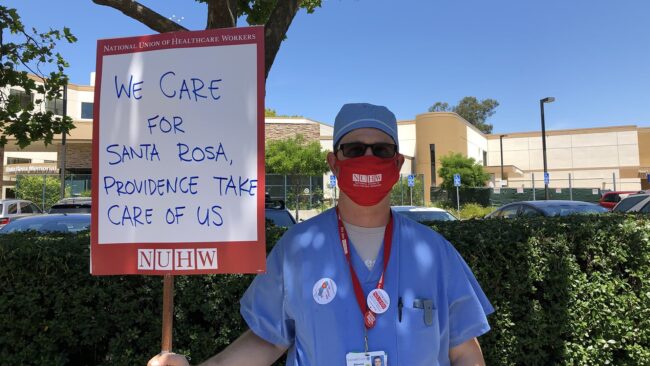 NUHW members at Santa Rosa Memorial Hospital voted 98 percent this month to ratify a new contract, ending a campaign that culminated in July with the nation’s largest pandemic era strike.

The contract they ratified this month includes a 13 percent raise over four years and several other hard-fought victories including:

“I’m proud of my co-workers for continuing to stand united for a fair contract, despite all the uncertainty we faced this year, said Shannon Signer, a radiology tech. “It was a long, hard-fought battle, but we showed how our hard work and persistence can result in forcing Providence to concede and do the right thing.”

Despite Santa Rosa Memorial reporting among the highest profits in the Providence St. Joseph System, the hospital had been seeking a smaller pay raise and severe cuts to health benefits and PTO. However, workers forced management to backtrack on those proposals during more than a year of bargaining.

The contract at Santa Rosa Memorial follows recent agreements with Providence hospitals in Petaluma, Napa, Humboldt County and Tarzana. Leaders at all of NUHW’s Providence hospitals began working together and supporting each other during their contract campaigns, and they are committed to building a united front to win even better contracts in the coming years.

“We have more power at the bargaining table when we fight together,” Singer added. “I hope this victory will inspire all of us to continue to build our unity and strength among the Providence hospitals to win even better contracts in the coming years.”