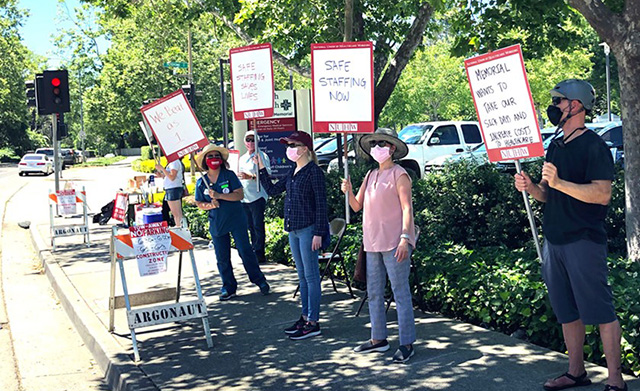 Over the past three years, caregivers at Santa Rosa Memorial Hospital have worked through a pandemic and two wildfires while the hospital has recorded operating profits exceeding $200 million.

Yet, instead of honoring its caregivers with a fair contract, the hospital’s parent company, Providence St. Joseph Health, is proposing takeaways that would cut paid-time-off and increase healthcare premiums.

In response, hundreds of workers held an informational picket outside the hospital earlier this month, and are considering going on strike in July.

“I don’t understand how a hospital can make so much money, and then try to cut health benefits and sick leave during a pandemic,” said Taylor Davison, who registers patients in hospital’s emergency room. “Providence St. Joseph only cares about profit. We’re sick of their greed.”

Santa Rosa Memorial Hospital is the designated trauma center for Sonoma County, serving all residents who have been badly injured, no matter their insurer. It was the only hospital in the city to remain open during both the October 2017 North Bay Wildfires and the 2019 Kincade Fire. It’s also one Providence St. Joseph’s most profitable hospitals, netting  $201 million in operating profits over the past three years — nearly double the combined operating profits of Providence’s four other Northern California hospitals.

“We’re tired of all the takeaways,” said Mito Gonzales, a lab technician told the North Bay Bohemian. “It feels like they are using the pandemic against us.” In addition to the Bohemian, the picket was covered by news stations KSRO and KBBF.