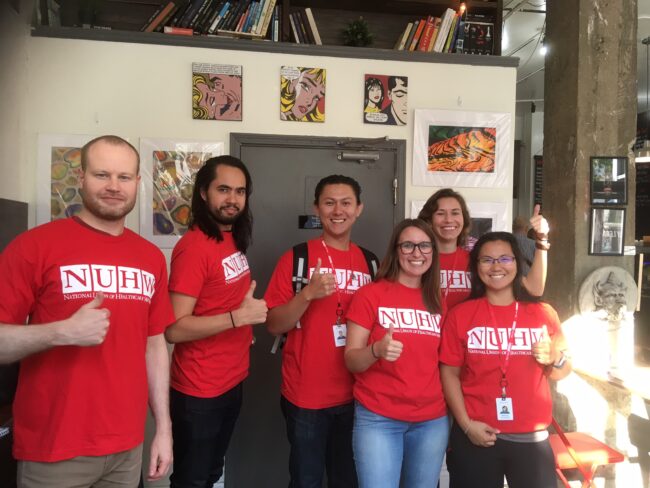 The National Union of Healthcare Workers further cemented itself as the union of choice for mental health clinicians Thursday with an overwhelming organizing victory at Richmond Area Multi-Services, Inc.

“I am so proud of my fellow RAMS clinicians for voting to form a union, said Lisa Windes, a mental health counselor. “We want to deliver the best quality of care to our clients, and we want RAMS to continue being a place that attracts and retains thoughtful and hard-working clinicians. By partnering with NUHW, we have a chance to better advocate for ourselves and our clients.”

After bargaining a contract that bolstered staffing and delivered significant raises for mental health clinicians at Kaiser Permanente, NUHW has won organizing elections over the past year for mental health workers at UCSF Benioff Children’s Hospital Oakland and Janus of Santa Cruz, a drug rehabilitation center.

“Lawmakers on both sides of the aisle told us they were happy that a union was fighting to achieve mental health parity, and we’ve heard the same from prospective members,” NUHW President Sal Rosselli said. “We’re getting a lot of inquiries from clinicians, who are seeing what they can accomplish for themselves and their patients when they stand together and demand a voice in their workplace.”

At RAMS, a nonprofit that operates in San Francisco schools and serves community members, the union will represent psychologists, therapists, behavioral health counselors, employment consultants and clinical supervisors. Earlier this year, members of the San Francisco Board of Supervisors sent the nonprofit a letter asking managers to remain neutral in the organizing campaign, and the nonprofit obliged.

“We are thrilled to represent caregivers at RAMS and look forward to productive bargaining sessions that result in a fair contract that benefits workers and patients alike,” Rosselli said.