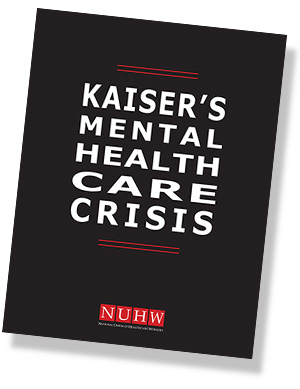 Kaiser simply does not staff its mental health services with enough psychologists, therapists, and social workers to handle the caseload. And that caseload is growing rapidly under the Affordable Care Act and the Medi-Cal carve-in. Understaffing has forced patients to endure lengthy, illegal waits for appointments, and these delays have sometimes had tragic results for patients, and have even led to suicides.

Kaiser’s 2,500 California mental health clinicians, all of whom are NUHW members, began raising questions about these issues four years ago. Kaiser ignored their concerns at the bargaining table and when expressed through the chain of command.

Kaiser has stonewalled its patients, its caregivers, and state regulators for four years. Enough is enough. NUHW members have authorized a statewide strike if Kaiser does not take immediate action in bargaining to guarantee adequate staffing, timely care for its mental health patients, and sustainable working conditions for its clinicians.

Kaiser was fined by the California Department of Managed Health Care for these violations in 2013. The fact that it still has not corrected these problems is outrageous. With more than 7 million enrollees, Kaiser is California’s largest health plan. These failures to provide proper care have put thousands of patients at risk. Kaiser has had two years to correct the problems but the situation is only getting worse.

Last Saturday, Covered California began its open enrollment for coverage that begins on January 1 of 2015. Just six weeks from now, hundreds of thousands of more patients will likely be added to Kaiser’s clinics — even though there’s not enough staff on the floors today to care for Kaiser’s current members. That’s why we have such urgency about forcing Kaiser to fix the problems that deprive patients of the care they need and deserve.

The parallels with the scandal that engulfed the Veterans Affairs Administration earlier this year are striking and prompted NUHW in June 2014 to call for a federal investigation into Kaiser’s mental health services. And in a few weeks, we will be meeting in Washington D.C. with more than a dozen mental health advocacy groups to brief them on this ongoing crisis.

Withholding services while increasing membership is an effective w ay to score record profits but it has led to woefully inadequate care, as well as five class-action lawsuits filed by patients and families who say Kaiser’s violations contributed to tragic outcomes, including suicides. Meanwhile, Kaiser’s profits are through the roof — $14.5 billion since 2009, and this year’s profits have shattered last year’s record by 40 percent.

This forced the clinicians to go public, taking their concerns to the California Department of Managed Health Care, which conducted a 15-month investigation, affirmed the clinicians’ claims, and hit Kaiser with a cease-and-desist order and a $4 million fine. Kaiser finally paid the fine in September but still has not corrected the problems.

The violations not only continue but are growing worse. Data submitted by clinicians to the DMHC show that Kaiser is still understaffing its psychiatric services and in some cases instructing clinicians to falsify records to conceal long wait times for appointments. Kaiser has not increased staffing to meet its patients’ needs. While the number of patients has grown dramatically under the Affordable Care Act and the Medi-Cal carve-in, Kaiser has merely shifted resources from return access — that is, treatment appointments — to initial access, meaning diagnostic appointments. In other words, patients in some clinics may find it easier to get a first appointment (a diagnostic appointment), but they’re forced to wait weeks, even months for treatment appointments. Kaiser has not fixed the delays, they’ve just shifted the delays from the front end to the back end to give the appearance of compliance. At best, Kaiser’s changes have created a system of “Rapid access to no care.”

This effort by mental health clinicians to bring Kaiser into compliance with the law, to hold Kaiser accountable to its patients, is the reason that contract negotiations have dragged on for four years. These clinicians could have settled with Kaiser four years ago and received wage increases. Instead, they have sacrificed those wage increases to defend their patients and to live up to the ethical code that’s an inherent part of their jobs as psychologists, therapists, and social workers.

In bargaining this week with our Southern California members, we presented Kaiser with a comprehensive settlement proposal. We proposed committees in each facility to work with management to address all staffing concerns, and third-party mediation when the two sides cannot agree. Dozens of hospitals have this arrangement in place. NUHW has this arrangement in its contract with Sutter Health’s California Pacific Medical Center.

As far as the economic issues, we’re not asking to break any new ground. We’re asking only that Kaiser maintain current health and retirement benefits — the same benefits that Kaiser promised to these clinicians when they were hired — and provide the same modest wage increases Kaiser has given to 90,000 other Kaiser workers.