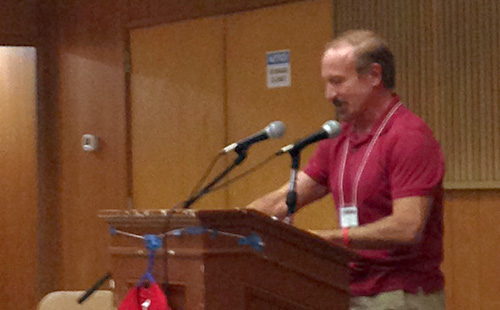 NUHW members and staffers attended the National Strategy Conference for the Labor Campaign for Single-Payer Healthcare August 22-24 in Oakland. NUHW President Sal Rosselli, along with other Bay Area labor leaders, gave a welcoming address Friday evening. The conference brought together more than three hundred activists representing three groups who are working towards health justice and a single-payer system in the United States: Healthcare-NOW!, Labor Campaign for Single-Payer Healthcare, One Payer States, and Labor United for Universal Healthcare.

In accordance with the conference’s theme, “Organizing for Healthcare Justice in the Age of Obamacare,” Labor leaders urged activists to “finish the job” following implementation of the Affordable Care Act (ACA). “We win when we build a social movement of social justice — healthcare justice — with a single standard of care for all.” This and similar slogans of conviction, energy, excitement, and labor–community unity echoed in the historic union hall of the International Longshoremen in Oakland.  A growing sense that our current system is increasingly unsustainable was repeatedly raised and an urgency to take the momentum forward. Inspiring speakers, informative workshops, debate, and enthusiasm were heard and felt on how “to get this done,” whether through ballot initiatives, mobilizing the public by exposing the corporate greed of healthcare companies, both the for-profit and the “non-profit” such as Kaiser Permanente, and/or to rally around the public’s embrace of the federal Medicare program that will mark its 50th anniversary in 2015.

The conference featured presentations on the changing structure of healthcare post-ACA, and challenges and opportunities for a single-payer solution. The implications of healthcare pricing for labor negotiating collective bargaining agreements or representing multi-employer plans was voiced across states and regions. As we well know, our friends at Unite Here and public sector unions spoke of how any additional monies on the bargaining table were re-allocated to rising healthcare premiums. The role of a social media strategy was emphasized to get the message out to educate, activate, and mobilize labor rank and file and the public at large to understand that single-payer is the answer to get the profit motive out of healthcare. Reports, discussion, and debate were heard regarding the following strategies:

John Nichols, a writer for the Nation, reminded us that we already won the moral argument and economic argument when we advocate for a system with “Everybody In, Nobody Out.” What’s left is how to get to the win. We were urged to return to our labor halls and worksites to gather patients’ stories and work with labor councils to organize around this issue as a basis for building a progressive, humane, social justice labor movement. Recent articles in the East Bay Express and other media are examples of getting our patient stories out to the general public.

We return now to mobilize our union members to continue the hard work of labor activism. Of course, we wouldn’t have it any other way.

“Of all the forms of inequality, injustice in healthcare is the most shocking and inhumane.” — Martin Luther King, Jr.