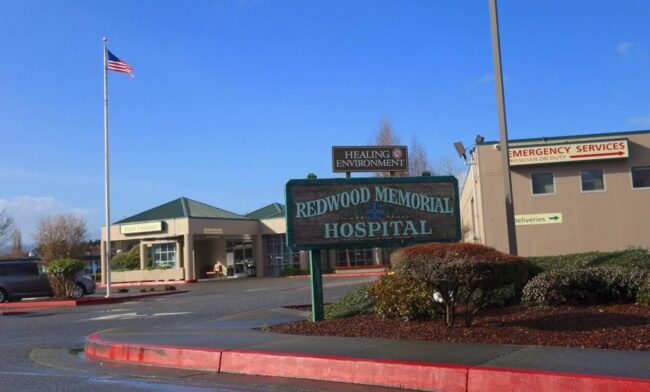 “I am noticing a clear pattern of systematic termination, loss, and reduction of services at Redwood Memorial Hospital through actions including benign neglect and strategic decisions to relocate and bolster those same services at St. Joseph Eureka Hospital despite the commitments agreed to in the (agreement between the hospital systems and the state)... At this point in time, I am concerned that pediatric and obstetric service lines are also imminently in jeopardy.”

Noting that Redwood Memorial CEO Roberta Luskin-Hawk refused to fully commit to retaining full-time staff for women and children’s services at the hospital, Supervisor Steve Madrone questioned whether Fortuna-area patients, particularly expectant mothers, would have sufficient time to access the services at Providence St. Joseph’s hospital to the north in Eureka, the Times-Standard reported.

“I know it’s only 20 minutes or so,” Madrone said, “but 20 minutes in certain situations still can mean a life.”

Providence St. Joseph is required to maintain women’s and children’s medical services at Redwood Memorial through June 2021 as part of an agreement that Attorney General Becerra negotiated in 2016 authorizing the merger between Washington-based Providence and California-based St. Joseph Health.

Community members now want Becerra to extend that requirement for another five years, and they have good reason to question Providence’s intentions. The company has already violated its 2016 agreement with Becerra by failing to meet its requirement to provide sufficient charity care for patients who can’t afford their hospital bills. Last year, Becerra rejected a partnership between Providence and Adventist health, determining that the deal would be bad for patients.

Meanwhile, Providence has routinely understaffed both Redwood Memorial and St. Joseph Eureka hospitals, leaving caregivers to protest on behalf of patients. Hundreds of workers represented by the National Union of Healthcare Workers held a one-day strike last November demanding a contract that includes provisions to bolster staffing, and they are ready to stand with local officials to protect services at Redwood Memorial.