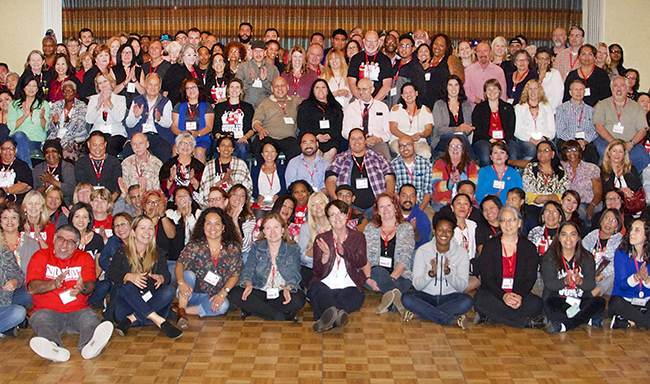 Nearly 300 stewards from throughout California gathered in Oakland in October for NUHW’s fourth annual Leadership Conference.

We reviewed our progress over the past year, including winning 23 contracts 11 union elections, (see the 2016 highlight video here) and set goals for the coming year. We discussed the importance of organizing new members into our union (see the organizing video here). And we debated and voted to adopt a resolution outlining our organizing goals for 2017.

Members took part in a plenary session and participated in eight workshops during the day, from steward trainings to strategic organizing sessions.

On Sunday we gathered again to discuss our resolution. Stewards discussed it in groups and reported back to the assembly to suggest further refinements for the resolution, after which the it was unanimously adopted.

We also took the opportunity to honor and express our gratitude to a number of people who were instrumental in NUHW’s success since its inception in 2009. We honored former staff and volunteers who donated their energy and time — sometimes at great personal expense — to our union in its early days, and those who worked for us in the years that followed.