For the first time since Martin Luther King Jr. Day became a federal holiday in 1986, Kaiser Permanente will honor the King Holiday as a paid holiday this year for all employees.

The drive to make Kaiser recognize the King Holiday was spearheaded by NUHW-represented mental health clinicians. Through their Racial Justice & Equity Committee, therapists made recognizing Martin Luther King Day as a paid holiday a top priority for addressing structural racism within Kaiser. After Kaiser management reneged in late 2021 on their earlier promise to make the King Holiday a paid holiday in 2022, therapists in Richmond and Oakland voted to hold a one-day strike in protest.

Below is an interview with Sabrina Chaumette, a Kaiser therapist in Oakland, reflecting on the strike that forced Kaiser to finally honor Martin Luther King Jr. Day as a paid holiday. The interview has been edited for length and clarity.

Question: You’ve worked at Kaiser for 14 years. What did you do on Martin Luther King Jr. Day through your tenure?

A: I always worked MLK Day because the way Kaiser handled MLK Day was unlike other holidays. In order to have it off, you had to spend the day doing community service somewhere.

You’re not required to do service for Christmas Day or New Year’s Day or Thanksgiving. It just felt like a slap in the face to Black providers and other providers who support MLK’s mission. Why is it for this holiday that means so much about equality that you require people to do service in order to have it off?

Q: How did you feel about having to work on Martin Luther King, Jr. Day?

A: I didn’t want to work on MLK Day because it sent a message to my clients that the day isn’t important. I had apologized in the past for offering a Black client an appointment on MLK Day, and they said things to me like,  “How can you work on this day? Doesn’t the organization know this is important?”

Q: How was the decision made to strike?

A: In early 2021, through our medical chief, we were told that we would get MLK Day as a paid holiday in 2022. And then most of the year goes by and around November 2021 Leadership sent a message saying they made a mistake — that they hadn’t had permission to make it final yet. And so all these months we had been believing we were going to get MLK day off.

If the chief tells you that you have MLK Day off, that’s not gossip. It felt like this was another way of feeling dismissed. A lot of us wrote emails (to management) saying how upset we were.

With them taking it back, I just felt it was too much. They kept asking us to apologize for their insensitivity to the community. It just seemed like a strike was the right thing to do.

Q: After the vote was taken to strike, Kaiser announced that it would make the King Holiday a paid holiday for all employees starting in 2023. Given that, why did you still want to proceed with the strike?

A: I began to read more of MLK’s work in which he talked about integration — about how when he would write to a non Black audience, they would respond, “It’s not the right time. The country isn’t ready for this.”

And I thought, that’s the same thing that Kaiser’s telling us. They tell us in the early part of 2021 that we’re going to get MLK Day in 2022 and then they send an email saying it’s not the right time. It just felt like this was a parallel process. Kaiser was not ready to recognize MLK Day the same way the country wasn’t ready for integration.

So, the more I read MLK’s works the more I felt why should I trust Kaiser’s promise that it’s going to be 2023 when in 2021 they told us we were going to have the holiday the following year.

Q: Leading up to the strike, the San Francisco Chronicle published your commentary about why you were striking. What was it like having that article published?

A: It was initially really scary. When you’re one of three Black clinicians (on the Oakland adult team) drawing that much attention to yourself feels scary — like you’re exposed. And we’re therapists, and we don’t usually talk publicly like this. But I thought doing this article said I was standing for something — that this was living up to my values even if it comes at a risk or a cause. Because I think creating a movement does take risks and does cost you something.

And I wanted my community to be proud of me. People at church would tell me that they saw my article. We had our holiday party for our department in December. One of our interns thanked me for writing the article. I get a lot of “thank yous” from people for saying things in the article that they thought about but weren’t sure how to say.

Q: Did you face any retaliation from Kaiser for the commentary or your interviews during the strike?

A: No. I think it would be pretty embarrassing for them if they retaliated against a Black provider who’s addressing something they said they were going to give to our community and then took back.

Q: Your brother died of a drug overdose just days before the strike. Can you talk about deciding to proceed with striking while still in mourning?

A: My brother was a Black man who had been in the mental health system his entire life. He died at 55. He had his first psychotic episode at age 18. He’s the kind of client we serve. He got mental health treatment at Kaiser.

I felt like he could have been killed by the police. He had gotten in trouble with the police for his actions when he was ill.

So I felt like I spoke for him. I spoke for mothers. I spoke for brothers and siblings of other Black folks in the community who worry about what’s going to happen to their mentally ill person who goes into the mental health system – what kind of care will they get? 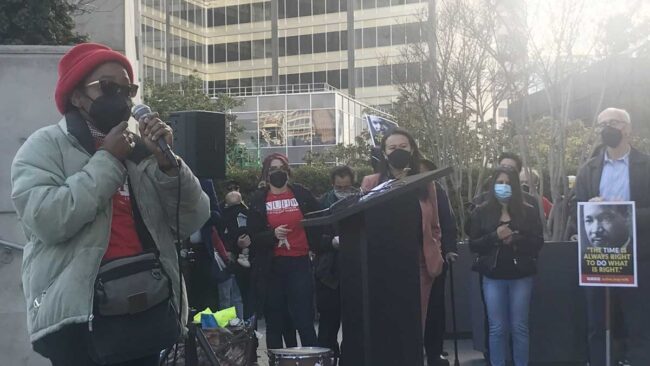 Sabrina Chaumette speaks at a rally during the 2021 MLK Strike by Kaiser clinicians.

Q: What was it like doing so many media interviews during the strike?

A: It was extremely nerve-racking. This was so public in a way that I don’t usually do. I try to stay very private for my patients and myself and my family.

But it just was so important to me to do it. This is later in my career. I’ve been in practice for 25 years. I’d never stepped out like this before. But part of our job as providers isn’t just to be in the session, but to be out in the world advocating for those who can’t advocate for themselves.

Q: One of the most powerful moments of the strike was the march from the Oakland Medical Center to Kaiser’s corporate headquarters in Downtown Oakland. How did it feel to be part of that?

A: It was a wonderful collective feeling to walk together with people because you all believe in something and you’re doing it as a community and you all believe it’s right, even though you know that it comes at a cost to you. You’re there without pay, and you have to reschedule your patients. But when I believe in something and it feels moral – for me there’s nothing else to do.

Q: Did the strike change your relationships with your colleagues?

Q: The strike also brought attention to the lack of diversity in Kaiser’s mental health clinics. Can you speak to why that impacts the care that patients receive.

A: I am now one of four Black clinicians on Kaiser’s adult team in Oakland. Clients will delay an intake because they want to see me. There’s a reason for that. It’s important for them to see someone who looks like them. They don’t have to code switch.

Q: Can you say more about that?

A patient choosing to delay an intake in order to see a Black clinician is likely to be influenced by the mistrust of the mental health system which has a history of not treating Black patients in a culturally relevant manner.

For example, not acknowledging the way systemic racism, the history of segregation, red lining, police over patrolling Black communities might leave them very guarded about entering a large mental health system in an inner city clinic which doesn’t have enough providers who look like their mothers, fathers, brothers and sisters.

Q: Have you seen any progress from Kaiser in this area over the past year.

A: I don’t know. It’s not like they don’t try to hire. But what I shared with them is for Kaiser to be able to hire more clinicians who look like me, it’s going to have to be a safe place and it’s not a safe place if you make excuses for not having MLK Day off. If you’re going to market yourself to Black clinicians, being able to say we have this day off is significant.

Q: Any final thoughts on the strike one year later?

A: I feel proud because no one in my community can say I didn’t stand for something. I was anxious at times about being so public, but there was nothing I did that I regretted. Every Kaiser employee will be off for MLK Day on Monday. I believe we did that as a union group, because I don’t trust that Kaiser wouldn’t have come back and said “we’re not ready yet for 2023.”

Q: Do you have plans for Martin Luther King Jr. Day this year?

A: When I talked with other Black clinicians about what they are planning to do on MLK Day, they said they plan to rest. As I think about it now, because we deal with so much trauma from our community, rest is necessary. We have a large caseload of people who specifically want to work with us — so our burden is very heavy. We are tired and there are too few of us to carry as many patients as we try to serve.

We want to serve them because what happens to them could happen to us, to me. I am the mother of three adult sons. When they leave the house, I try not to think too hard about them and their travels. It is my greatest fear that they will get profiled and not come home.

When they were teens, we practiced how to get stopped by the police. I hated taking their innocence away. But I had to keep them alive. So do the parents I serve. After a police shooting, most of the trauma work I am doing is with Black parents who worry about their children leaving the house. They are almost stuck with fear. This is a trauma response.

They too are trying to tell their children how to stay alive and it is awful that we have to do this. This is what is so heartbreaking about my work and why this MLK Day is a day to rest, so that on Tuesday I can keep showing up. 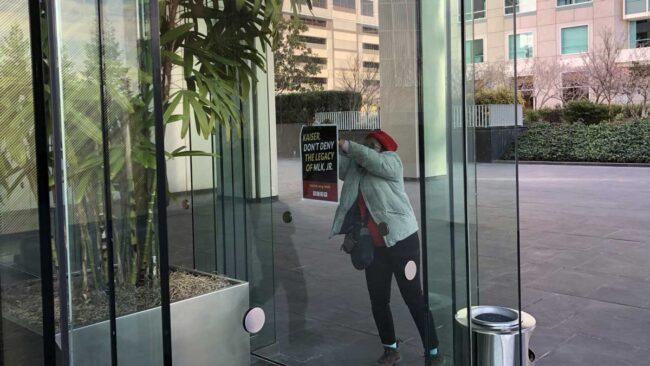 Sabrina Chaumette tapes her picket sign to the outside glass wall of Kaiser’s corporate headquarters in Downtown Oakland.