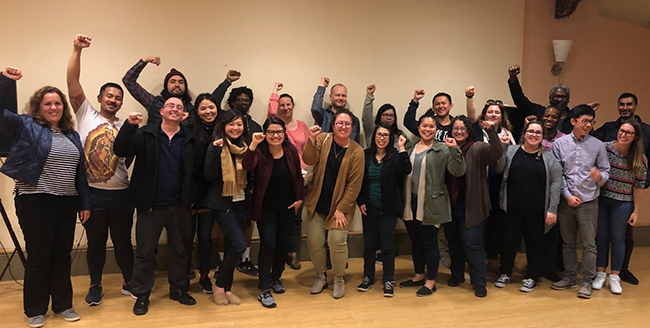 NUHW-represented workers Richmond Area Multi-Services, Inc. voted overwhelmingly this month to ratify their first contract after more than a year of negotiations.

The 18-month pact includes an average wage increase of 14 percent, retroactive to July 1, 2018 for the 125 mental health professionals at the San Francisco nonprofit. The workers will also get additional pay for the licenses and speaking a foreign language.

The counselors, psychologists, therapists, employment consultants and clinical supervisors remained united during lengthy contract talks and kept pressure on management to strike a deal that would help workers afford to stay at RAMS, which serves San Francisco Unified students.

Earlier this year, workers attended back-to-back board meetings, expressing their frustration over the slow pace of negotiations and the low pay that had caused high turnover.

Negotiations started to pick up following the board visits and a worker petition, culminating in the agreement that was tentatively reached in May.

“I’m so proud of my co-workers for sticking together during many months of bargaining and refusing to settle for anything less than a fair contract,” Mental Health Counselor Stacey Porciuncula said. “The agreement will help us deliver the best quality care and will help RAMS retain its dedicated, hardworking employees.”